Anger over Breonna Taylorâs killing and the prosecutorsâ handling of the case has spread far from Louisville, with protests on Wednesday night drawing crowds in cities around the nation. Some rallies, like those in Portland, Maine, and Memphis, were small but vocal, while protests in Seattle and Portland, Ore., were effectively declared riots after demonstrators set fires and threw explosives at the police.

Thousands of protesters marched through the streets of New York, including a group in Brooklyn that met outside the Barclays Center and swelled to around 2,000 people as it marched across the Manhattan Bridge and shut down traffic.

In Portland, Ore., a person in a crowd of protesters threw a Molotov cocktail at a line of police officers, sending the officers running for safety as flames erupted on the street.

About 100 people joined the Rev. Michael Pfleger in a march on Chicagoâs South Side, stopping to shut down traffic in the Auburn Gresham neighborhood for about an hour.

The demonstrators called for all three officers, who are white, to be held to account for Ms. Taylorâs death in March.

About 100 people marched on Chicagoâs South Side, stopping to shut down traffic in the Auburn Gresham neighborhood for about an hour.

The protesters used a gallon of fake blood to spell âBreonnaâ in the middle of the intersection, and then sat in the street and chanted, âWe want justice, we want it now.â

Protesters lit candles and placed flowers at a vigil outside of the U.S. District Court in Seattle.

A lire aussi
The Relentless Shrinking of Trumpâs Base

Protesters gathered outside of the Multnomah County Justice Center, the site of more than 100 nights of demonstrations in Portland. 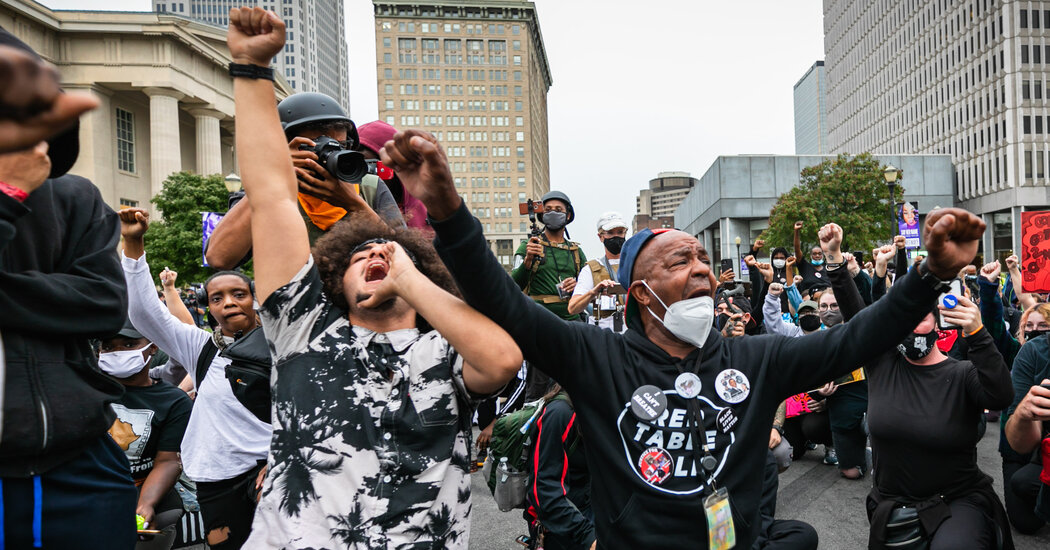