A centrist bipartisan group is trying to break through the stimulus stalemate — and put pressure on Congress to get something done.

Members of the House Problem Solvers Caucus on Tuesday released what they viewed as an effective compromise offer amid the ongoing impasse between Democratic and Republican negotiators over the next phase of Covid-19 aid. The proposal includes about $1.5 trillion in funding, and lands somewhere in between Republicans’ latest $650 billion “skinny stimulus,” and Democrats’ more generous $2.2 trillion proposal (they’ve reduced their bid from the more than $3 trillion included in the HEROES Act.) The Problem Solvers’ plan is a product of efforts by 25 Democrats and 25 Republicans who make up the group, a number of whom represent battleground House districts.

Their legislative framework features a combination of priorities from both parties, including $120 billion for enhanced unemployment insurance (which covers a $450 weekly supplement for eight weeks, and some additional funding after that), $500 billion for state and local government funding, and $280 billion for another round of stimulus checks that mirror the earlier ones. There’s also a provision addressing business liability protections, a chief demand of the GOP.

Several of the lawmakers in the caucus emphasized that they were fed up with the inertia in Congress and felt compelled to suggest an alternative as millions of Americans continue to grapple with the devastating economic fallout of the pandemic. “Months of inaction have left too many at the precipice, and principle must overcome politics,” said Rep. Dean Phillips (D-MN) in a statement.

The Problem Solvers’ plan also comes ahead of a heavily contested election this fall. These lawmakers hope to hold up the plan to highlight how they’re attempting to address the impact of the coronavirus as they face a significant push from voters to approve additional aid.

This proposal was quickly dismissed by eight Democratic House committee chairs who said it “falls short” of what’s needed, even as it underscored the urgency to take swift action. Senate Majority Leader Mitch McConnell hasn’t indicated whether he’d back the proposal — though it’s likely that the cost of it is more than what Republicans in the upper chamber would be comfortable with.

On Tuesday, Speaker Nancy Pelosi announced that the House wouldn’t be leaving for its next recess — scheduled to begin in early October — until a compromise on stimulus was reached, but vulnerable members will likely still go home and campaign as the election approaches. House leaders would then call people back for a vote if a deal is reached.

“We are committed to staying here until we have an agreement that meets the needs of the American people,” Pelosi said during a CNBC interview Tuesday. What this means for progress in the near term is still unclear.

The Problem Solvers’ proposal, which is currently a legislative framework and not a fully fleshed-out bill, attempted to include some of the larger demands from both parties while pushing back against some of their respective concerns, such as Republicans’ worries about spending too much.

The plan also includes automatic “boosters” that would extend funding for unemployment insurance and a third round of stimulus checks if the effects of the pandemic are still severe in 2021. Below are some of its key provisions:

Democratic and Republican lawmakers have been deadlocked for months when it comes to another major stimulus package, so much so that there’s a growing sense more aid might not get approved until after the election. With both the current public health and economic crises dragging on, however, the pressure is increasing on both parties to make progress on new legislation.

As experts have previously told Vox, Republicans are poised to bear a significant portion of the blame for the current inaction, since they are the party in control in both the Senate and White House. But that doesn’t mean Democrats — particularly endangered House members — are completely shielded from scrutiny. According to an August CNBC/Change Research poll, voters in key swing states see both Democrats and Republicans as responsible for delays to the approval of more enhanced unemployment insurance.

The Problem Solvers’ proposal aims to get negotiators back to the table, lawmakers emphasize. It’s also one of the latest signs that moderate members in both chambers are among those eager for leadership to take additional action before the November contest, rather than after it.

Millions turn to Vox each month to understand what’s happening in the news, from the coronavirus crisis to a racial reckoning to what is, quite possibly, the most consequential presidential election of our lifetimes. Our mission has never been more vital than it is in this moment: to empower you through understanding. But our distinctive brand of explanatory journalism takes resources. Even when the economy and the news advertising market recovers, your support will be a critical part of sustaining our resource-intensive work. If you have already contributed, thank you. If you haven’t, please consider helping everyone make sense of an increasingly chaotic world: Contribute today from as little as $3. 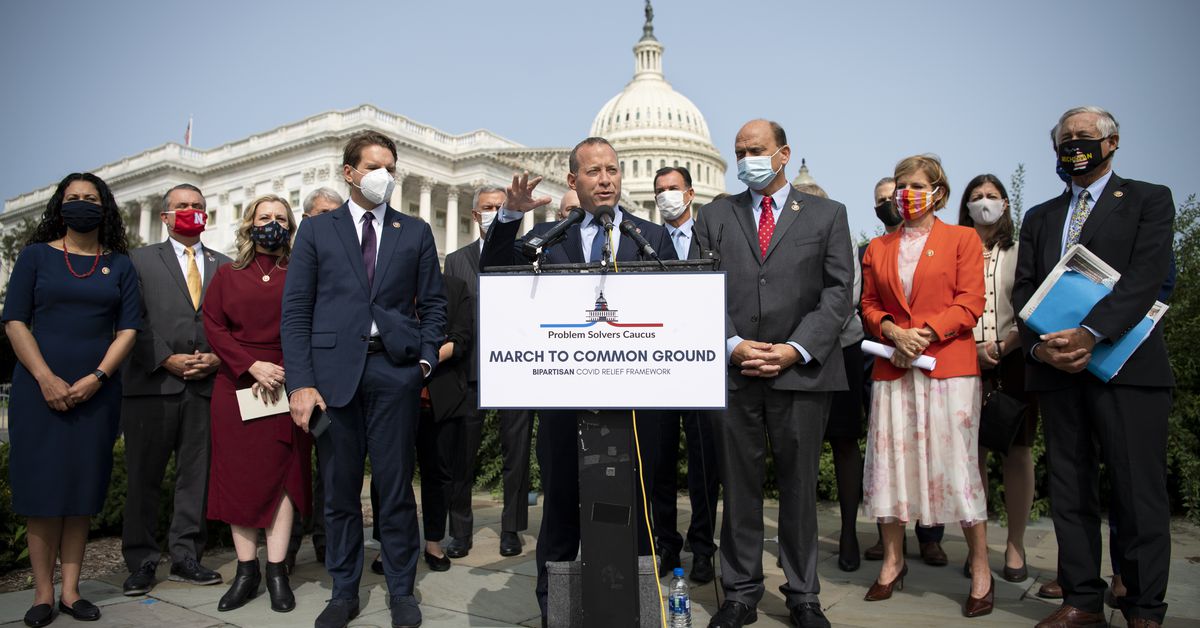 Trump may have just destroyed his own campaign

Schumer’s plan to beat Trump: ‘Kick his ‘effin ass and we will win’

Trump may have just destroyed his own campaign

Schumer’s plan to beat Trump: ‘Kick his ‘effin ass and we will win’