If Trump’s third nominee is confirmed, the court will tilt to the right. Campaigners fear setbacks on abortion, healthcare and more

Ruth Bader Ginsburg was revered, a pioneering champion of gender equality. But her potential replacement on the supreme court threatens a systematic unraveling of hard-won rights that have given American women some semblance of autonomy and control.

“It is a particularly painful irony that much of her legacy is at great risk of being undone by another woman,” said Lucinda Finley, a professor at the University at Buffalo School of Law. “A tragic irony.”

On Saturday night, Donald Trump nominated 48-year-old judge Amy Coney Barrett to take Ginsburg’s seat on the court. If confirmed, Barrett will make history as only the second woman to join the court after being nominated by a Republican president. But for women’s rights experts, that will do little to mask what Trump actually wants from his nominee: judicial philosophies warm to corporate interests but cool on healthcare and reproductive rights.

“This vacancy represents a pivotal voice and moment in time where many of the freedoms that we have held dear really hang in the balance,” warned Rachel Sussman, vice-president of state policy and advocacy at the Planned Parenthood Action Fund.

Looming over the confirmation process is an existential threat to Roe v Wade, the landmark 1973 ruling that made abortion legal. Although White House press secretary Kayleigh McEnany denied earlier this week that the president would ask any prospective nominee to “prejudge” Roe, Trump himself has promised to appoint “pro-life justices” and predicted that the ruling will be overturned.

Trump has also signaled that he wants justices who will vote to dismantle the Affordable Care Act, which requires most private health care plans to cover contraception with no out-of-pocket cost for the patient. Even with Ginsburg alive to dissent, the court majority – bolstered by Trump’s first two appointees – ruled last summer that practically all nongovernmental workplaces could flout ACA contraceptive mandates based on religious or moral objections, in line with Trump administration policy.

In November, the justices, including Barrett if she has been confirmed, will hear arguments on whether to scrap the ACA altogether. Their decision could jeopardize access to birth control for many women, Finley warned.

While women should realize “it’s all on the line” in terms of reproductive rights, “they should also understand that it does not stop there,” said Emily Martin, vice-president for education and workplace justice at the National Women’s Law Center.

She expected a new Trump justice to make it more difficult for individuals to fight discrimination and harassment in the workplace, and easier for employers to force workers to waive their day in court.

In Congress, just one day after the supreme court announced Ginsburg’s death, the Missouri senator Josh Hawley doubled down on his pledge to only vote for “nominees who understand and acknowledge that Roe was wrongly decided”.

Hawley and other staunch conservatives may have an ally in Barrett: she has voted three times on abortion-related cases in the seventh US circuit court of appeals and has looked kindly on restrictions twice, according to Vox. On the third case, the court ruled that anti-abortion activists could not approach women outside of clinics and healthcare facilities.

Seventeen abortion-related legal battles are one step away from the supreme court, and if Trump successfully shifts the panel’s ideological balance right with a 6-3 conservative majority, any case that questions the constitutionality of abortion restrictions could serve as a vehicle to overturn Roe, Finley said.

She believes Roe is “in the greatest jeopardy it’s been [in] since it was issued in 1973”.

Rachel Johnson-Farias, executive director of the Center on Reproductive Rights and Justice at the University of California, Berkeley School of Law, said: “In terms of the cruelty we’re seeing, maybe it’s existed before, but definitely not in my lifetime.

“…I don’t have the capacity to think of how bad it can get when your intentions are to be cruel.”

More than 25 million women of reproductive age “could lose access to safe, legal abortion” if justices overturn Roe, the Planned Parenthood Action Fund estimates. Attacks on bodily autonomy invariably fall hardest on women of color and the poor, who cannot easily afford to travel for an abortion, risk losing employment if they get pregnant, and are especially vulnerable to maternal morbidity and mortality.

The judiciary has been attacking Roe with “death by a thousand cuts” for years, Johnson-Farias said, and even without the dramatic fanfare of fully overruling it, supreme court justices could implement de facto local abortion bans by simply allowing lower-court analyses to stand. In the last decade, 33 states have enacted 479 abortion restrictions, the Guttmacher Institute reports.

A lire aussi
Trump, Biden will not shake hands at first debate due to COVID-19

“The only conclusion you can draw is that if we don’t stop President Trump and Senator [Mitch] McConnell from filling Justice Ginsburg’s seat, Roe could be rendered meaningless before it’s ever overturned,” Sussman said. “And for a lot of people, it already is.”

When it comes to gender discrimination, evidence suggests female judges are more likely to rule in favor of the alleged victim “even when you control for ideology”, said Eve M Ringsmuth, associate professor in the department of political science at Oklahoma State University.

But Martin, of the National Women’s Law Center, suspects a Trump appointee would likely buck that trend and instead add “one more thumb on the scale”, backing corporate interests on workplace issues such as pregnancy discrimination and sexual harassment.

News – Amy Coney Barrett: what will she mean for women’s rights? 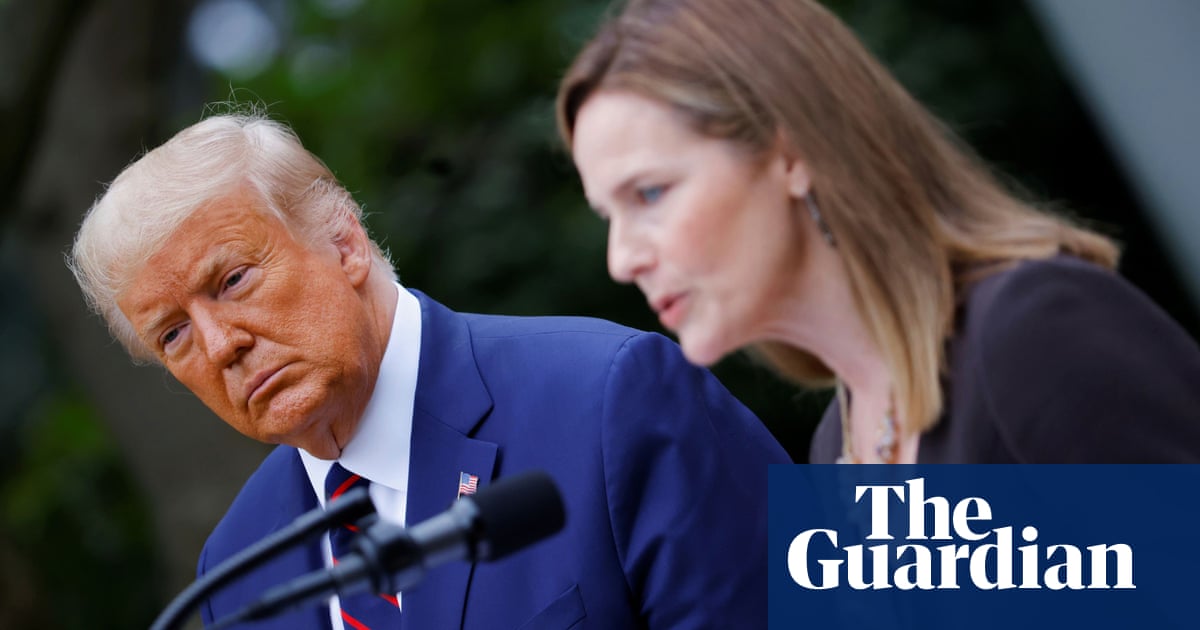