After wildfires consumed an entire town, students and teachers who had planned for remote classes found some comfort in staying connected amid the chaos.

Ash fell from an apocalyptic orange sky as Jennifer Willin drove home last week from the only school in tiny Berry Creek, Calif., where she had picked up a pair of Wi-Fi hot spots for her daughtersâ remote classes. Hours later, her cellphone erupted with an emergency alert: Evacuate immediately.

By the next morning, what one official described as a âmassive wall of fireâ had swept through the entire Northern California town of about 1,200 people, killing nine residents, including a 16-year-old boy, and destroying the school and almost every home and business.

Ms. Willin and her family escaped to a cramped hotel room 60 miles away. In her panic, she had forgotten to grab masks, but she had the hot spots, along with her daughtersâ laptops and school books. On Monday, the two girls plan to meet with their teachers on Zoom, seeking some comfort amid the chaos.

âTheyâre still able to be in school,â Ms. Willin said, âeven though the school burned to the ground.â

As the worst wildfire season in decades scorches the West amid a still raging pandemic, families and educators who were already starting the strangest and most challenging school year of their lifetimes have been traumatized all over again. Tens of thousands of people have been forced to flee their homes, with some mourning the loss of their entire communities.

But amid the twin disasters, the remote learning preparations that schools made for the coronavirus are providing a strange modicum of stability for teachers and students, letting many stay connected and take comfort in an unexpected form of virtual community.

Schools in other towns most damaged by the fires appear to have survived the flames, but as in Berry Creek, their students have been scarred and scattered. The fires prompted some West Coast schools to delay or cancel classes, and educators across parts of California, Washington and Oregon have spent recent days tracking down students to check on their safety.

Some schools have continued teaching remotely or are preparing to do so this week, even as families find themselves huddling in hotels, shelters and relativesâ homes.

Berry Creek Elementaryâs 60 students in kindergarten through eighth grade started school virtually on Aug. 12. Although the building was reduced to cinders as fire raked the town on Tuesday and Wednesday, most of the students already had school laptops, while the teachers, who all live in other towns, were not forced to evacuate. âSo theyâre up and ready to go,â Ms. Oxford said.

Still, there is no expectation that things will continue like normal. âWeâre not pushing the kids to log on,â Ms. Oxford said, âbecause the majority have lost everything.â

California is among the states hit hardest by the pandemic, with at least 758,000 coronavirus cases and over 14,000 deaths since the outbreak began. The vast majority of its school districts started the year remotely, only to deal soon after with fires, smoke and rolling blackouts across much of the state, creating another layer of disruption.

âItâs a difficult, difficult time,â said Linda Darling-Hammond, the president of the state Board of Education. âAnd at the same time, all of those difficulties that we experienced earlier have produced some ways of connecting and learning that are really, really valuable right now.â

Because of the pandemic, the state required districts to create instructional continuity plans, to prepare them to keep teaching even if students and staff members had to be in and out of school buildings as infection levels rose and fell in their communities over the course of the academic year.

Ms. Darling-Hammond said that California adopted the idea from Miami, where hurricanes and floods frequently close schools for days and weeks at a time. She said that as climate change drives more disasters in California and across the county, that kind of contingency planning will be critical for all schools.

âWeâre going to have climate-related events regularly,â she said, âeven once we get a vaccine for Covid.â

As wildfire seasons have grown more intense over the past decade, California has already learned some lessons about how to reopen schools efficiently after fires.

The Tubbs Fire in 2017 destroyed 5,600 structures and killed 22 people across Northern Californiaâs wine country. Students in schools that had been destroyed or damaged had to be crammed into remaining buildings, learning in cafeterias and libraries; the state did not have emergency rules to allow classes to meet in buildings that didnât meet the exacting earthquake standards required for California schools.

A year later, when the Camp Fire destroyed much of the town of Paradise, the state gave schools flexibility to reopen temporarily in alternative spaces. A month after the fire, high school students from Paradise started learning online, with the opportunity to check in with their teachers at the Chico Mall. The following month, school reopened in a former Facebook facility by the Chico Municipal Airport.

Steven D. Herrington, the schools superintendent in Sonoma County, is one of several education leaders in the state who have become experts in disaster management in recent years. He said that school districts in his county â one of those scorched by the Tubbs Fire â have lost an average of three weeks of instructional time each year over the last three years because of wildfires.

Remote learning has created some continuity this year as fires have swept across the state, he said. If his countyâs schools were operating traditionally, they would have had to close at least one day last week because of the poor air quality.

Even so, he said, parents and students are under tremendous psychological strain. âYou have parents stuck in their homes trying to cover education with their students, and the smoke in the air is dirty so they canât let the kids out,â he said. âItâs a compounding effect.â

The threat of wildfires is familiar to the people of Berry Creek, a mountain town with no stoplights in Butte County, tucked amid lush forests on the edge of the Sierra Nevada just a few ridges over from Paradise, which was destroyed in 2018.

âWe were watching the smoke from our porch,â said Will Cotter, the school board president in Berry Creek, who is also a former volunteer firefighter.

Residents have evacuated in four of the past five years because of wildfires, Mr. Cotter said. To protect his home, he had diligently cleared brush nearby and installed a metal roof, concrete siding and irrigation sprinklers around the deck. None of those safeguards were enough: The Bear Fire, later renamed the North Complex Fire, consumed his house last week along with the rest of his 20-acre property, he said.

Mr. Cotterâs 15-year-old son, Riley, was home playing video games when the evacuation order blared on Tuesday. Berry Creek doesnât have a high school, so Riley attends Las Plumas High School in nearby Oroville â although all of his classes are currently online.

After packing up his computer and virtual-reality headset and stuffing some clothes into a grocery bag, Riley raced to help his mother load the familyâs two mules, Thelma and Pearl, onto a truck. The entire family, including Rileyâs sister, a college freshman who was also learning remotely, soon fled in their four vehicles.

They checked into a Motel 6 after dropping the mules at a shelter, but had to flee again in the middle of the night. They finally reached an uncleâs house in Colfax, nearly three hours from Berry Creek, where Riley and his mother, Carrie Cotter, a sixth grade teacher at a school in Palermo, have been able to virtually reconnect with their schools.

On Friday, Ms. Cotter met online with her students â some of whom live in evacuation zones â though only a few logged in. âA lot of families are in crisis,â she said. âMaybe they didnât grab their Chromebooks.â

Still, seeing their faces gave Ms. Cotter comfort, she said, as have the thoughtful emails she has received from students since Berry Creek was wiped out. âCovid is a blessing and a curse in this situation,â she said.

Rileyâs teachers told him he does not have to complete any assignments for now, but he is still doing his schoolwork, if only to pass the time and keep his mind off his homeâs destruction.

âIt gives me some semblance of normalcy and stimulus,â he said, âso my brain doesnât turn to mush.â 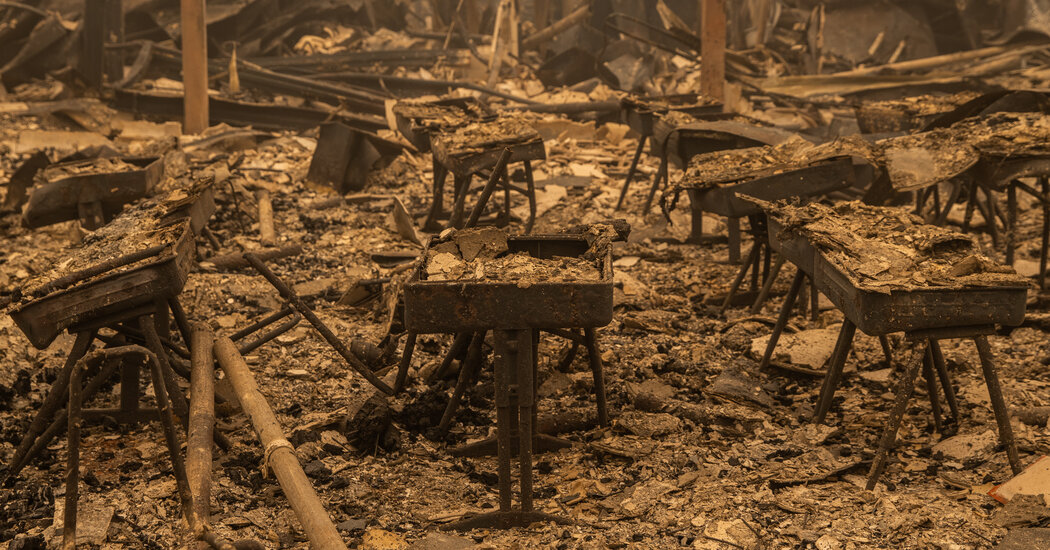