Barbados has announced its intention to remove the Queen as its head of state and become a republic by November, 2021.

Buckingham Palace has said Barbados’ intention to remove the Queen as head of state and become a republic is a ‘matter’ for the Caribbean nation.

Reading the speech, Governor-General Dame Sandra Mason said: ‘The time has come to fully leave our colonial past behind. Barbadians want a Barbadian Head of State.

‘This is the ultimate statement of confidence in who we are and what we are capable of achieving.

‘Hence, Barbados will take the next logical step toward full sovereignty and become a Republic by the time we celebrate our 55th Anniversary of Independence.’

Asked to comment on the Commonwealth country’s plans a palace spokesman said: ‘This is a matter for the government and people of Barbados.’

Downing Street said it was a ‘decision for Barbados and the Government there’ but that Britain would continue to ‘enjoy a partnership’ with the Caribbean island nation as members of the Commonwealth.

A Number 10 spokesman said: ‘We obviously have a shared history and remain united with Barbados in terms of history, culture and language, and we will continue to have and enjoy a partnership with them as members of the Commonwealth.’

The country gained its independence from Britain in 1966, though the Queen remains its constitutional monarch.

In 1998, a Barbados constitutional review commission recommended republican status, and in 2015 Prime Minister Freundel Stuart said ‘we have to move from a monarchical system to a republican form of government in the very near future’.

Barbados would join Trinidad and Tobago, Dominica and Guyana if it proceeds with its plan to become a republic.

Jamaica has also flagged such a transition, with Prime Minister Andrew Holness saying it is a priority of his government, but has yet to achieve it.

Barbados took another step towards independence from the UK in 2003 when it replaced the London-based Judicial Committee of the Privy Council with the Caribbean Court of Justice, located in Trinidad and Tobago’s Port of Spain, as its final appeals court.

Former Prime Minister Owen Arthur promoted the idea of a referendum on becoming a republic in 2005, however the vote was called off due to concerns raised by the Electoral and Boundaries Commission.

The Sugar Revolution, the introduction of sugar cane from Dutch Brazil, in the 1640s was highly lucrative but came at great social cost

Barbados was one of the oldest English settlements in the West Indies, being surpassed only by Saint Kitts.

The countries’ historical ties date back to the 17th century and involve settlement, post-colonialism and modern bilateral relations.

Since Barbados gained its independence in 1966, the nations have continued to share ties through the Commonwealth, with the Queen as Monarch.

The Barbadian Parliament is the third oldest in the entire Commonwealth and the island continues to practice the Westminster style of government.

Many of the historic Anglican churches and plantation houses across the island show the influence of English architecture.

In 1627, 80 Englishmen aboard the William and John landed on the Caribbean island and founded Jamestown (close to today’s Holetown), in the name of King James I.

The early settlers struggled to develop a profitable export crop and faced difficulties in maintaining supplies from Europe.

However, the Sugar Revolution, the introduction of sugar cane from Dutch Brazil, in the 1640s was highly lucrative and over the next decade more than two thirds of English emigres to the Americas went to Barbados.

But while this shift to sugar yielded huge profits, it came at a great social cost. Thousands of West African slaves were shipped across the Atlantic to work the plantations and workers suffered from low wages and minimal social services.

It is estimated that between 1627 to 1807, some 387,000 Africans were shipped to the island against their will and the country shifted from having a majority white population to a majority black population.

On 28th August 1833, the British Government passed the Slavery Abolition Act, and slaves across the British empire were granted emancipation.

The country became fully independent on November 30, 1966, during a time when the country’s economy was expanding and diversifying.

Since then, the Barbadian Parliament has remained a constitutional monarchy and parliamentary democracy, which is modeled on the British Westminster system of government.

In 2008, British exports to Barbados stood at £38 million, making it Britain’s fourth-largest export market in the region.

The views expressed in the contents above are those of our users and do not necessarily reflect the views of MailOnline. 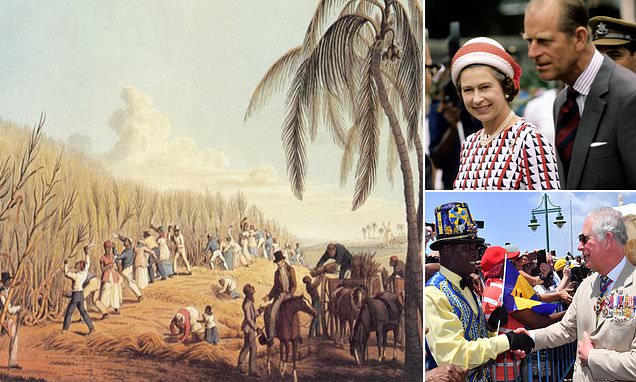