A “circuit breaker” lockdown is needed to tackle “eye-watering” coronavirus infection rates in some areas of the country, a Government advisor has warned.

Sir John Bell, regius professor of medicine at the University of Oxford, described other measures as “biting around the edges” and suggested more drastic action was necessary to “get on top” of the outbreak.

The comments came as more than half of England’s population woke up to new curbs under Boris Johnson’s “three-tier” coronavirus restrictions system.

Speaking on BBC Radio 4’s Today programme, Sir John said: “I can see very little way of getting on top of this without some kind of a circuit-breaker because the numbers are actually pretty eye-watering in some bits of the country and I think it’s going to be very hard to get on top of this just biting around the edges.

“If in the end we have to take kids out for two weeks, calm it all down, and then start ideally embedded in a much more rigorous testing regime then that’s maybe what we may have to do.”

In Liverpool, which was the first area to be placed under strict Tier 3 lockdown measures, the rate of coronavirus infections last week was 540 cases per 100,000 people. The Government’s limit at which it considers imposing quarantine restrictions on foreign countries is 20 cases.

Sir John’s comments were later echoed by Conservative former health secretary Jeremy Hunt, who also called for an end to the public war of words over local restrictions.

“I’ve always thought that it’s better to do things quickly and decisively than to wait until the virus has grown so I have a lot of sympathy with that,” Mr Hunt told the programme.

“But I think more important right now is we stop this public war of words between local leaders and national leaders because in a pandemic the most important thing is a consistent message because you really have to have compliance with the very, very important public health messages about social distancing.”

From midnight on Friday, more than nine million Londoners were banned from mixing with other households indoors as the capital was placed in the “high” risk Tier 2.

In London, Essex, York, Elmbridge, Barrow-in-Furness, North East Derbyshire, Erewash and Chesterfield, people can no longer mingle indoors with those from other households, including in pubs and restaurants.

Lancashire has been put under the most severe Tier 3 restrictions, forcing the closure of pubs and bars that cannot operate as a restaurant.

But local leaders in Greater Manchester are still resisting Government efforts to place the area in Tier 3, as the region’s mayor, councillors and MPs fight to secure more financial support for workers and businesses that would be forced to close.

Police battled to enforce restrictions in London last night as crowds of drinkers and anti-lockdown protesters in Soho resisted the 10pm curfew.

Officers were seen leading people away in handcuffs as people continued to gather after the curfew just hours before the restrictions were further tightened in the capital.

More than 28 million people in England now live in places under Tier 2 or Tier 3 restrictions.

Boris Johnson warned Greater Manchester mayor Andy Burnham on Friday he would impose Tier 3 measures if they could not reach an agreement, warning of a “grave” situation.

Mr Burnham and council leaders across Greater Manchester insisted they have done “everything within our power to protect the health of our residents”, and said people and businesses need greater financial support before they can accept the lockdown.

They also suggested in a joint statement that Downing Street had delayed discussions, adding: “We can assure the Prime Minister that we are ready to meet at any time to try to agree a way forward.”

From 6pm on Friday.eople in Tier 2 or 3 areas in England, as well as the central belt of Scotland and the whole of Northern Ireland, were banned from entering Wales.

Pubs, restaurants and cafes across Northern Ireland have had to close their doors to sit-in customers.

Some 1.5 million people in Lancashire entered Tier 3 today, after the Government said the move was needed to stem the “unrelenting rise” in Covid-19 cases in the region.

Pubs and bars across the North West county will close unless they serve sit-down meals. Stricter restrictions on socialising will also come into force.

People may not mix with others indoors or in a private garden, as well as in most outdoor hospitality venues.

However, Lancashire gyms will remain open, although they have been closed in the Liverpool City Region – the only other area under Tier 3 restrictions.

Mr Johnson has so far resisted calls to impose a short national lockdown known as a “circuit-breaker” which Labour has backed. However, The Prime Minister said he “can’t rule anything out” as he continued to pursue local measures.

The Scientific Advisory Group for Emergencies (Sage), which advises the Government, said earlier that the reproduction number, or R value, of Covid-19 transmission for the whole of the UK had inched up to between 1.3 and 1.5.

Sage said there had been “no clear evidence” that the course of the pandemic had changed in the last month, suggesting measures such as the rule of six and curfew have not had a large effect on it.

However, at the Downing Street press conference, England’s chief scientific adviser Sir Patrick Vallance said the R would be growing faster without the measures put in place to slow it.

Despite this, Sir Patrick said he agreed with chief medical officer Professor Chris Whitty that the “baseline” Tier 3 measures on their own would not be enough to reduce the infection rate sufficiently.

You can find our Community Guidelines in full
here. 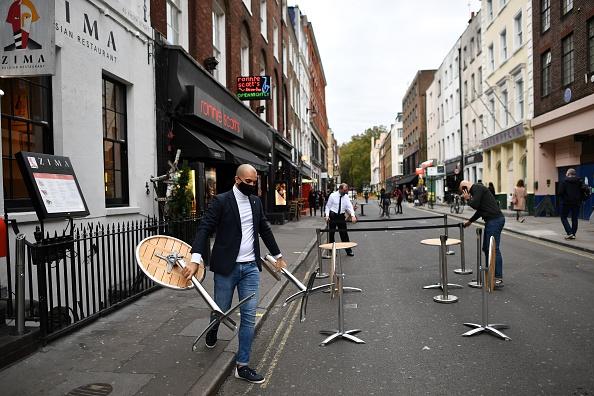