Hawaiiâs Reopening May Be Good for Tourism. Is it Good for Locals?

The travel industry and the islandsâ authorities say using testing could create a model for reopening international travel. But some locals object to being part of the experiment.

Since Hawaii welcomed tourists back in mid-October, allowing them to skip its 14-day quarantine as long as they had a negative coronavirus test, more than 100,000 people have rushed to the islands from mainland states, exciting state officials, some hoteliers, airlines and local business owners, who for seven months have watched the stateâs economy grind to a halt.

Instead of the quarantine, the islands began accepting a preflight coronavirus test for entry under a program it is calling Safe Travels. The state is only accepting what are known as nucleic acid amplification tests processed by specially certified laboratories, and test results from certain trusted testing and travel partners, including some airlines.

Those who test negative within 72 hours of departure are exempt from quarantine upon arrival. Those who didnât take a test before flying have to quarantine for 14 days, and those who arrive with a pending test must quarantine until they receive negative results. People who test positive are required to immediately take a PCR test, which detects the virusâs genetic material, and quarantine in their hotel room or other vacation lodging.

âHawaii is at the vanguard of what travel will look like for the next year or so as we reopen,â said Avi Mannis, senior vice president of marketing at Hawaiian Airlines, one of a handful of airlines that began offering pre-travel Covid-19 tests in October.

Hawaiian, through Worksite Labs, is offering state-approved tests to passengers at drive-through labs near Los Angeles International and San Francisco International airports for $90 for results within 36 hours, or $150 for day-of-travel express service. Passengers take PCR tests within 72 hours of traveling, upload their results to the Hawaii Safe Travel app before departing and show their results to state authorities in Hawaii upon landing. But the airline doesnât check passengersâ test results before they board.

âYour test results are between you, your health care provider and the state of Hawaii,â Mr. Mannis said.

The surge of arrivals â 8,000 of them on the first day pretesting was available â presented an opportunity to test out new protocols for travelers that could help determine how to reopen travel internationally. If Hawaiiâs reopening goes well, the belief is that preflight testing could become widespread. And on the islands, if hotels can figure out how to deal with growing occupancy, the same thing could be done worldwide.

But what travel industry actors view as an opportunity to reopen safely and pave a way forward, many locals and residents view as putting them in harmâs way with untested protocols and allowing people who might have the coronavirus onto the islands.

âIt feels like at every point that tourism gets prioritized,â said Landon Ton, a bartender and waiter in Waikiki. âIt feels, whether intentionally or not, like we are the guinea pigs for tourism. Like our leaders and the airlines are saying âCan we safely reopen tourism or not? Well, letâs see if Hawaii survives. If it does, letâs keep going. If it doesnât, probably a lot of Pacific Islanders have gotten sick and suffered.ââ

Mr. Ton said that on a recent hike near his home, he saw several groups of tourists heading to popular Koko Head without masks on, making him nervous that if any of them had the coronavirus they could pass it on to locals.

âTourism is terrorism to me right now,â he said. âIâd ask tourists to stay home for now, if they can. You could test negative, but get the virus afterward or you could have it and not realize. Why not skip this vacation for now?â

Earlier this year as governments and health organizations advised against nonessential travel, Hawaiiâs governor, David Ige, instituted a mandatory 14-day quarantine, a deterrent for tourists looking to escape for a quick vacation. In April, the state was paying people to leave in order to keep tourists out.

The quarantine, combined with other measures, like giving people citations for not wearing masks and fining those who broke the quarantine, helped the state hold the number of coronavirus cases down to 15,231. Florida, another popular vacation destination and a much larger state, has had more than 800,000 cases. In this sense, Hawaiiâs location in the Pacific and its quarantine have been advantageous.

But they have also been a curse, effectively closing the stateâs biggest industry. In 2019, Hawaii had more than 10 million visitors, an all-time high, according to data from the stateâs Tourism Authority. That number was expected to continue rising in 2020. When Hawaii put the quarantine into effect, arrivals fell drastically; at one point they were down 99 percent.

The drop in tourism has been devastating to the state, where almost a quarter of the economy is related to the industry. There has been a spike in homelessness and people at risk of becoming homeless; the number of people who could potentially lose their health care benefits is up and reports of domestic violence are up significantly, said Josh Green, the stateâs lieutenant governor. Had the islands kept the quarantine mandate longer, those numbers, as well as the number of people calling hotlines with plans of self harm, would have skyrocketed, he added.

âWe are all at risk whether we live here in Hawaii or on the mainland and we canât stay isolated forever, we wonât survive,â he said. âThere are people who want to ride this out until a vaccine comes, but itâs hard to make that policy when we know that homelessness will surge, kids wonât get vaccines and so on. Saying âdonât come under any circumstancesâ is not realistic.â

Lieutenant Governor Green said that although there have been some hiccups during the reopening process, including people taking tests that are not approved by the state or refusing to get tested at all, the vast majority of visitors have been getting tests and testing negative. The state is conducting voluntary follow-up testing four days after people arrive as part of its surveillance testing program. So far. data shows that few travelers have tested positive for Covid-19 after arrival in Hawaii.

âWe shouldnât be afraid of the pandemic, we should attack it with good policy and be the safest place,â Lieutenant Governor Green said. âIâm looking forward to the vaccination, but the virus is here for a while.â

âA lot of the set up that we put in place to be able to execute the Newark-to-Heathrow test flight that will run from November to December has been largely based on our experience in setting up testing centers in San Francisco into the state of Hawaii,â said Aaron McMillan, Unitedâs managing director of operations policy and support. âWeâre really bullish on this whole process.â

Mr. McMillan added that he believes that âin some markets, especially for international travel, until a vaccine is more widely available, testing will become part of the norm.â

For Jonathan McManus, the owner of Hotel Wailea Relais & Chateaux in Maui, testing presents a way to reopen safely after months of carrying an empty property. He says it will let him keep employees in jobs.

âWhat the data suggests so far is that here in Hawaii, testing has been the key to safely reopening,â he said. âWe now understand the data and the importance of testing. Testing provides a high level of protection for visitors, staff and residents.â

The hotel used to have an in-person welcoming process that included staff members putting leis on guests as they arrived and checking them in with a cocktail in hand. Now, a key is waiting for guests when they arrive, and capacity is capped at 60 percent. Each of the hotelâs 72 suites has its own heating, ventilation and air conditioning system.

Gary Moore, managing director at Timbers Kauai at Hokuala, said that the reopening has been âanything but clear,â but what is clear is: âWe have to find a way to live with the disease.â Mr. Moore said that despite various challenges, the lessons learned at his property about distancing people, mask enforcement, temperature checking and even separating guests and putting them in âbubbles,â could be applied at other resorts.

âThe resort bubble would let guests leave their rooms and enjoy on-site amenities while completing the mandatory quarantine while wearing GPS-monitored bracelets,â he said, noting that should Hawaii reinstate the mandatory quarantine for all travelers, these bubbles would make it possible for the resort to remain operational for inter-island travel and for locals.

The staff at Timbers is made up of locals and their safety is essential, Mr. Moore said.

âOur employees go home, many have large families and they are with parents and grandparents and children, and keeping them safe is essential to everyoneâs well-being,â he said.

In October, images of the Honolulu mayor, Kirk Caldwell, handing out masks to tourists along Waikikiâs Kuhio Beach made rounds in group texts, on Facebook groups and on Twitter and were criticized by Oahu residents for being hypocritical and unfair. Nearly 50,000 locals had been cited for being on the beach, but tourists were being encouraged to visit it. Mr. Caldwell did not respond to requests for comment.

âThey are criminalizing locals and then pandering to tourists,â said KawenaÊ»ulaokala Kapahua, who recently graduated from the Chaminade University of Honolulu and lives in Kaneohe in Oahu. âJust yesterday someone who had taken a pre-travel test found out that their test was positive. But they had already brought coronavirus into the community. We are being put at risk by travelers.â

Mr. Kapahua organized a protest in the spring asking the government to force tourists to leave the island.

And on other islands, like Kauai, residents said that itâs too soon to welcome tourists back, and information about reopening isnât being communicated clearly, causing more anxiety for them.

âI talk to people in our community everyday and they all tell the same story,â said Justin Kollar, Kauai Countyâs prosecuting attorney. âThey feel like weâve done such a great job here on Kauai keeping the pandemic at bay and the state is running over that with a reopening process that is not well thought out and not well organized and itâll open the floodgates to this virus.â

Mr. Kollar noted that the sentiment that tourists are more important than locals is one felt by many of his constituents.

âThereâs a sense that locals havenât celebrated, havenât seen family and have been asked to keep doing that so tourists can come play on our beaches,â he said.

News – Hawaiiâs Reopening May Be Good for Tourism. Is it Good for Locals? 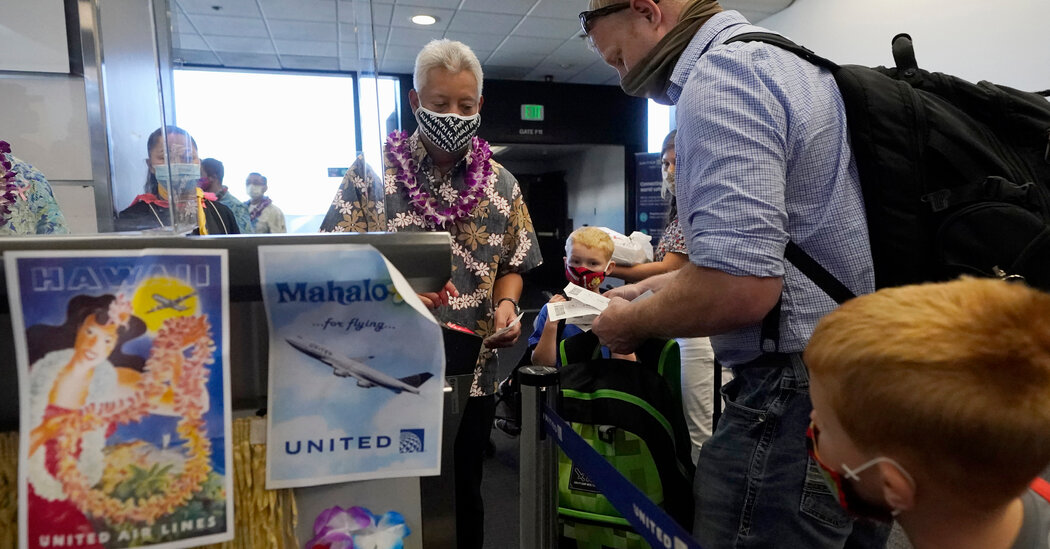