How United Airlines Is Trying to Plan Around a Pandemic

The airline has to figure out which planes to stash in the desert and which ones to park at airports without knowing when demand will recover.

A United Airlines plane undergoes inspection at O’Hare International Airport in Chicago before it is cleared for flight. The airline is trying to predict where travelers will fly, a challenge in the best of times.Credit…Lucy Hewett for The New York Times

When the coronavirus pandemic wiped out travel in the spring, United Airlines slashed its flight schedule, salted away aircraft in the New Mexico desert and parked planes at hangars around the country.

Now, with what is normally the peak summer season behind it and travel proceeding in fits and starts, the airline is continuing to fine-tune every facet of its business, from maintenance to flight planning, as it tries to predict where a wary public will fly, a challenge even in the best of times.

“We can really throw away the crystal ball, which was hazy to begin with,” said Ankit Gupta, United’s vice president for domestic network planning.

This week, the airline announced a $1.8 billion loss during the third quarter, with revenues down 78 percent compared to the same period a year ago. While United said it was ready to “turn the page” from survival to rebuilding, it said it didn’t expect a recovery to begin in earnest until 2022.

Passenger volumes for U.S. airlines are down about 65 percent, according to an industry group, and major carriers have taken on enormous debt as they lose billions of dollars each month. After hopes for a second congressional rescue package faded last month, United furloughed more than 13,000 workers and American Airlines furloughed 19,000.

But while every airline is struggling, each struggles in its own way. United relies far more than its rivals on international travel, which is deeply depressed and is expected to take far longer than domestic travel to bounce back. Lucrative business travel will be slow to return, too, and the airline said this week that it had amassed more than $19 billion in cash and other available funds to cope with the downturn.

“We’ve got 12 to 15 months of pain, sacrifice and difficulty ahead,” United’s chief executive, Scott Kirby, said on an earnings conference call on Thursday. “But we have done what it takes in the initial phases to have confidence — it’s really about confidence — in getting through the crisis and to the other side.”

In navigating that path, the airline has focused on finding savings while positioning itself to serve the few passengers who still want to fly. When the virus devastated travel in March and April, the airline took hundreds of planes out of circulation. Among the first to go were twin-aisle jets used for international flights, which dropped early as countries closed borders. Single-aisle planes — the kind used for domestic routes — followed soon after.

About 150 planes were sent to long-term storage in Roswell, N.M. — yes, that Roswell — where the dry conditions are better suited for long-term aircraft preservation. Many others were parked at United’s hub airports in and near cities including Chicago, Washington and Newark, where technicians could more easily get them back into service if needed.

Since July, United has brought back more than 150 of the planes that the airline or its regional carriers had grounded, it said on Thursday. About 450 are still stashed away, but must be maintained in a way that allows flexibility.

To get it right, Tom Doxey, United’s senior vice president for technical operations, and his team consult models created by computer scientists and solicit guidance from maintenance crews. Generally, two considerations loom large: how soon a plane will need substantial maintenance and the likelihood that it will be among the first to start flying again.

“If you have an aircraft that maybe is less likely to come back soon, you kind of want it at the back of the parking lot,” Mr. Doxey said. “It goes into prolonged storage and it probably goes to a desert location.”

As demand for domestic flights picks up, United will most likely put single-aisle Airbus A320s or Boeing 737s to use, so it keeps many at the ready, he said. The same goes for the Boeing 777s or 767s, which can be used for international travel, whenever it rebounds. Planes that recently underwent intensive maintenance are kept closer at hand, too, than those that may soon be due for a deeper examination.

Fortunately for Mr. Doxey and United, some travel trends have started to emerge, making his job easier. Most of the people still flying are staying within the country, visiting friends and relatives or vacationing outdoors. If airline planners are right, travel to powdery ski slopes in the West may pick up soon, too. Those flights would put United’s smaller single-aisle planes to use.

Planning routes in such lean times can be incredibly complex, with airlines weighing a range of variables on limited resources. Not only do the right planes need to be in the right places, but planners must be sure that they have the gate agents, baggage handlers, flight attendants and pilots needed for each flight — out and back — all while trying to accommodate erratic travel trends.

To predict winter demand, Mr. Gupta and his domestic planning team consulted with resort operators and staff members near ski towns to gauge how many flights the company should add to snowy destinations. Based on recent and historical trends, they also added an unusual mix of direct flights to Florida this winter from the Northeast and the Midwest. On Thursday, United began offering preflight coronavirus tests to customers headed from San Francisco to Hawaii to help them avoid the state’s quarantine requirements and hopefully increase sales. It is also planning to expand service on dozens of routes to tropical destinations near and within the United States and resuming flights on nearly 30 international routes.

With few people flying internationally, though, United has less need for its wide-body jets, which account for a quarter of its fleet. But it has found a use for some of those bigger planes: When demand for air cargo spiked, United put its larger, fuel-efficient 787s to work hauling goods.

Before the pandemic, the airline operated more than 300 daily flights abroad, but that figure dipped to 11 during the depths of the crisis. Next month, the airline plans to operate more than 150 international departures each day. To understand when and how that demand might recover, Patrick Quayle, who oversees international network planning for United, and his team track a range of indicators, including national travel restrictions, the travel habits of dual citizens and the economic ties between countries.

As difficult as planning has been, it is becoming even harder. The federal stimulus passed in March, the CARES Act, gave passenger airlines $25 billion to help keep tens of thousands employed. It also made life a little easier for network planners, allowing them to worry less about whether a flight would cover labor costs, a major expense, and freeing them up to make last-minute changes knowing that there were far more employees available to work than needed. The aid expired last month, though, and prospects of another round of funding have largely faded.

There may be some reason for hope, though. The Transportation Security Administration screened nearly one million people at airport checkpoints on Sunday, the highest number since mid-March, though it was still less than 40 percent of the number screened on the same weekday last year. Whatever happens in the months to come, Mr. Doxey said, United is prepared: “We have a plan in place.”

News – How United Airlines Is Trying to Plan Around a Pandemic 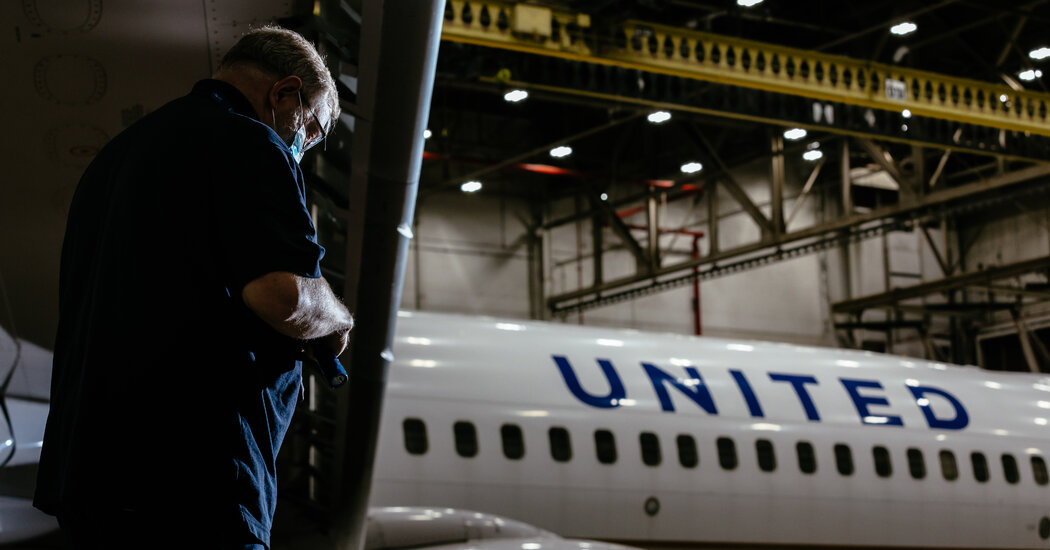