John Durham’s team has sought information about the F.B.I.’s handling of the Clinton Foundation investigation, raising questions about the scope of the prosecutor’s review.

WASHINGTON — From the beginning, John H. Durham’s inquiry into the Russia investigation has been politically charged. President Trump promoted it as certain to uncover a “deep state” plot against him, Attorney General William P. Barr rebuked the investigators under scrutiny, and he and Mr. Durham publicly second-guessed an independent inspector general and traveled the globe to chase down conspiracy theories.

It turns out that Mr. Durham also focused attention on certain political enemies of Mr. Trump: the Clintons.

Mr. Durham, the U.S. attorney in Connecticut assigned by Mr. Barr to review the Russia inquiry, has sought documents and interviews about how federal law enforcement officials handled an investigation around the same time into allegations of political corruption at the Clinton Foundation, according to people familiar with the matter.

The approach is highly unusual, according to people briefed on the investigation. Though the suspected crimes themselves are not comparable — one involves a possible conspiracy between a presidential campaign and a foreign adversary to interfere in an election, and the other involves potential bribery and corruption — and largely included different teams of investigators and prosecutors, Mr. Durham’s efforts suggest the scope of his review is broader than previously known.

Mr. Durham’s focus on the Clinton Foundation inquiry comes as concerns deepen among Democrats and some former Justice Department officials that his investigation is being weaponized politically to help Mr. Trump. Congressional Democrats last week called on the department’s inspector general to investigate whether Mr. Durham’s review was free from political influence after his top aide abruptly resigned, reportedly over concerns that the team’s findings would be prematurely released before the election in November.

The Clinton Foundation investigation began about five years ago, under the Obama administration, and stalled in part because some former career law enforcement officials viewed the case as too weak to issue subpoenas. Ultimately, prosecutors in Arkansas secured a subpoena for the charity in early 2018. To date, the case has not resulted in criminal charges.

Some former law enforcement officials declined to talk to Mr. Durham’s team about the foundation investigation because they felt the nature of his inquiry was highly unusual, according to people familiar with the investigation. Mr. Durham’s staff members sought information about the debate over the subpoenas that the F.B.I. tried to obtain in 2016 and have also approached current agents about the matter, but it is not clear what they told investigators.

“The Clinton Foundation has regularly been subjected to baseless, politically motivated allegations, and time after time these allegations have been proven false,” the foundation said in a statement.

Right-wing news media and prominent Republicans have long promoted a narrative that the F.B.I.’s leadership and the Justice Department under the Obama administration were biased in favor of Hillary Clinton. They have accused agents and prosecutors of aggressively investigating Mr. Trump and his associates — ignoring evidence to the contrary — while moving more cautiously on allegations of corruption at the Clinton Foundation and Mrs. Clinton’s use of a private email server to conduct government business while she was secretary of state.

“There was a clear double standard by the Department of Justice and F.B.I. when it came to the Trump and Clinton campaigns in 2016,” said Senator Lindsey Graham of South Carolina, the Republican chairman of the Senate Judiciary Committee and a staunch supporter of Mr. Trump.

In the Russia investigation, F.B.I. officials did take aggressive steps such as obtaining a secret wiretap to eavesdrop on a former Trump adviser. But they also moved quietly, deploying informants and an undercover agent in part to keep the existence of the investigation from becoming public and affecting the 2016 election.

Mr. Barr has repeatedly attacked the Russia inquiry as Mr. Durham has investigated it, calling it “one of the greatest travesties in American history” and ignoring a policy that generally prohibits the department from making public statements about current investigations. Mr. Barr’s statements have raised hopes among the president’s supporters that Mr. Durham will unearth evidence of a plot to sabotage Mr. Trump’s campaign and presidency.

So far, only one person has been charged with criminal wrongdoing: Kevin E. Clinesmith, a former F.B.I. lawyer who pleaded guilty to altering an email that investigators relied on to renew an application for a secret wiretap on the former Trump campaign adviser Carter Page.

The president and his Republican allies have tried to cast the Clinton Foundation, a philanthropic organization, as corrupt, accusing Mrs. Clinton of taking steps as secretary of state to support the interests of foundation donors.

Critics have suggested that she was part of a quid pro quo in which the foundation received large donations in exchange for supporting the sale of Uranium One, a Canadian company with ties to mining stakes in the United States, to a Russian nuclear agency. The deal was approved by the Committee on Foreign Investment in the United States when Mrs. Clinton was secretary of state under President Barack Obama and had a voting seat on the panel.

The allegations against Mrs. Clinton were advanced in the book “Clinton Cash,” by Peter Schweizer, a senior editor at large at Breitbart News, the right-wing outlet once controlled by Mr. Trump’s former top aide Stephen K. Bannon. The book contained multiple errors, and the foundation has dismissed its allegations.

But the book caught the attention of F.B.I. agents, who viewed some of its contents as additional justification to obtain a subpoena for foundation records.

Top officials in Justice Department criminal division denied a request in 2016 from senior F.B.I. managers in Washington to secure a subpoena, determining that the bureau lacked a sufficient basis for it and that the book had a political agenda, former officials said. Some prosecutors at the time felt the book had been discredited.

The decision frustrated some agents who believed they had enough evidence beyond the book, including a discussion that touched on the foundation and was captured on a wiretap in an unrelated investigation. Other F.B.I. officials at the time believed the conversation’s relevance to the foundation case was tenuous at best.

The disagreement erupted anew later in the summer of 2016, when a top Justice Department official suspected that F.B.I. agents in New York were trying to persuade federal prosecutors in Brooklyn to authorize a subpoena after the department’s criminal division officials in Washington had declined such a request. By the time the F.BI. officials revisited the issue, the Justice Department officials were also concerned that serving subpoenas would violate the practice of avoiding such investigative activity so close to an election.

Ultimately, the Clinton Foundation dispute embroiled Andrew G. McCabe, then the F.B.I. deputy director, who was accused of leaking information about the case to a reporter and later lying about it to the Justice Department inspector general. The episode helped prompt Mr. McCabe’s firing in 2018 and a failed effort by the Justice Department to prosecute him.

A foundation official confirmed that the charity was served with a subpoena and complied with the request for information.

Republicans in 2017 had called for a second special counsel to investigate the foundation, but Rod J. Rosenstein, then the deputy attorney general, did not believe the scant evidence collected in the case justified one, a person familiar with the matter said. Instead, Jeff Sessions, the attorney general at the time, asked John W. Huber, the U.S. attorney in Utah, to review whether federal law enforcement officials had fully investigated the matter.

Shortly after Mr. Durham began his review, Mr. Barr said in an interview with CBS News in May 2019 that Mr. Huber was winding down his work related to Mrs. Clinton. In January, The Washington Post reported that Mr. Huber’s investigation had ended; its findings were not made public. Mr. Trump later attacked Mr. Huber, accusing him of doing “absolutely NOTHING.”

President Trump undermined democracy by refusing to commit to a peaceful transfer of power. Polls show him in tight races even in some red states. Read live updates.

Early voting for the presidential election starts in September in some states. Take a look at key dates where you live. If you’re voting by mail, it’s risky to procrastinate. 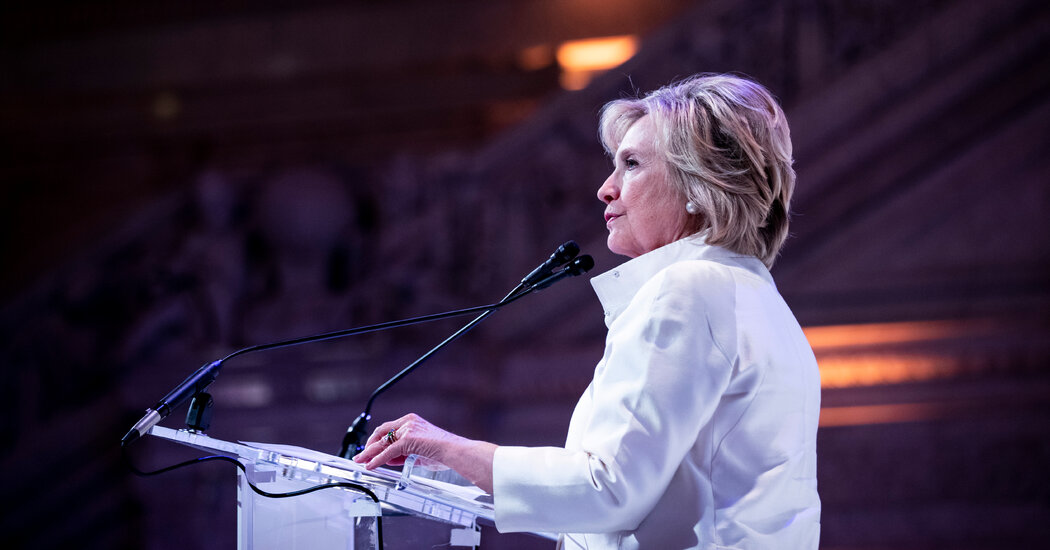