YAMHILL, Ore. â The West has been burning, and one forest fire reached about five miles from the Most Beautiful Farm in the World, where I grew up here in the rolling hills west of Portland.

I told my mom to get ready to evacuate in a hurry. She replied that the important things to save werenât documents but our farm dogs â one of whom is wary of vehicles for fear that the next stop will be the vet.

In the end the local fire was extinguished because of the heroic work of a local fire department made up mostly of volunteers. They were bolstered with a deluge of food, drinks and gratitude from the community.

This was the best of rural America, and it was followed on Thursday night by what seemed the best sound in the world: rain pattering on the roof. Still, the fires fill me with disquiet for three closely related reasons.

First is the fear that these fires and their accompanying smoke represent the new normal. Researchers estimate that air pollution in China causes 1.6 million deaths a year, and smoke from fires in the West may eventually cause respiratory diseases that claim more lives than the fires themselves.

Second is frustration at the federal governmentâs paralysis. Just a couple of months ago, President Trump rushed to send in unwanted federal agents to deal with protests and trash fires in downtown Portland, but he seems indifferent when millions of acres and thousands of homes burn across the West.

Third is the reaction of so many ordinary citizens here in Oregon and around the country: Instead of seeing these mammoth forest fires as a wake-up call to the perils of a warming planet, they believe and spread wild conspiracy theories suggesting that these fires were the work of shadowy leftist arsonists.

Trump and Fox News, along with various right-wing websites, have nurtured a panic about the anti-fascists known as antifa, so now we have groundless rumors that forest fires are being set by antifa or Black Lives Matter protesters.

These conspiracy theories arenât just coming from fringe figures. Michael Cross, the Republican nominee for attorney general of Oregon, alleged in a Facebook post: âIâve heard of at least 14 people involved in starting these fires and this is just in the last 12 hours. â¦ Sounds to me like domestic terrorism.â

Letâs be clear that there is zero evidence that political extremists have set any fires. The F.B.I. called the reports untrue and pleaded with the public not to spread rumors that âtake valuable resources away [from] local fire and police agencies.â Three sheriffâs offices in Oregon issued similar statements.

âSTOP. SPREADING. RUMORS,â begged the Douglas County Sheriffâs Office, which added that âour 9-1-1 dispatchers and professional staff are being overrunâ with calls based on false reports.

There should be no mystery about what actually caused the fires to become so dangerous: dry conditions exacerbated by climate change coupled with an unusual windstorm. (At least 13 Oregon fires were started when the windstorm downed power lines, Willamette Week reported.) The scientific consensus is overwhelming: Higher temperatures dry out forests, creating a risk that we are entering an age of âmegafire.â

Back in 2000, the First National Climate Assessment warned that the Northwest faced increased risk of fire danger, and it is one of the most discussed consequences of climate change.

The conspiracy theories create real perils. Some citizens in Oregon set up armed roadblocks to stop cars and look for arsonists. A couple photographing fires in the town of Molalla somehow provoked rumors of antifa arsonists, prompting gunmen to search for them. âApparently I came very close to being shot by a group of âvigilantes,ââ the woman, Jennifer Paulsen, tweeted afterward.

Iâve seen militias set up armed checkpoints in countries like Yemen and Sudan, but I never expected to see them in my beloved home state. In Multnomah County, the sheriff warned that people could be arrested for setting up illegal checkpoints, and on Tuesday, sheriffâs deputies issued criminal citations to three men for establishing a roadblock.

This is an echo of something I wrote about in June: a hysteria in rural towns that they were about to be attacked by antifa, leading citizens to pull out their guns and gather to fight back. When the invaders never showed up, the vigilantes sometimes regarded this as vindication: They had scared off the attackers.

All this rumormongering leaves me feeling that the social fabric is unraveling, as if the shared understanding of reality that is the basis for any society is eroding. The ugliness also raises a question: If we see this unraveling now when the science is clear and the rumors are so manifestly groundless, then what might happen in November if the election results are close? Brace yourselves.

The Times is committed to publishing a diversity of letters to the editor. Weâd like to hear what you think about this or any of our articles. Here are some tips. And hereâs our email: [email protected] 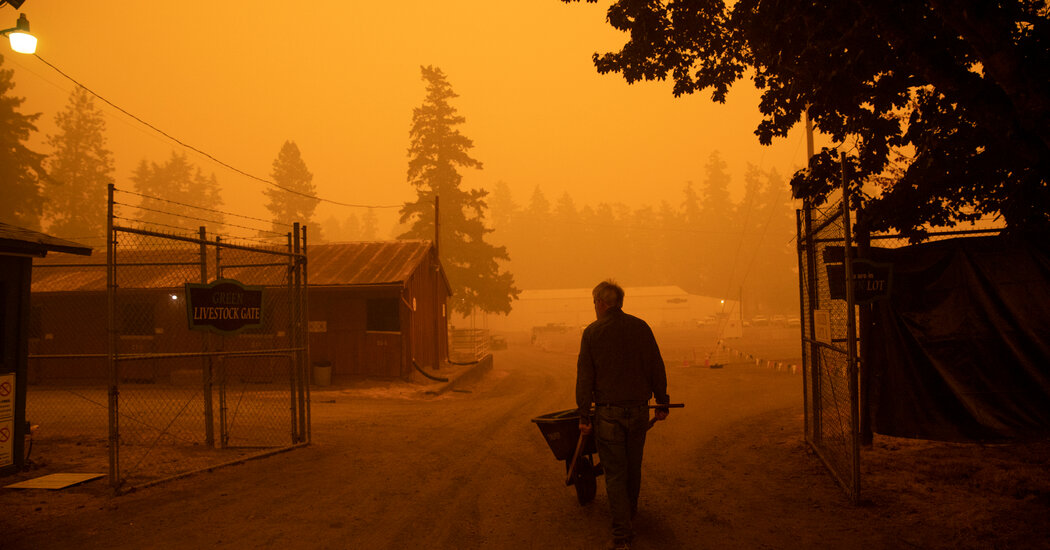 Covid-19 Live Updates: U.S. Officials Warn Against Easing Restrictions as a Drop in Cases ‘May Be Stalling’

Covid-19 Live Updates: U.S. Officials Warn Against Easing Restrictions as a Drop in Cases ‘May Be Stalling’