Opinion | How the G.O.P. Might Get to Yes on Replacing Ruth Bader Ginsburg

Imagine a Republican senator uncertain whether to vote for the Supreme Court nominee that President Trump is poised to put forward. He is part of a select group, our senator; perhaps we can even guess how many children and grandchildren he has, how steeply his hair still rises from his brow, how close he once came to being president himself.

Here is how he might consider the problem. On the one hand there is the threat of what keeps being called a “legitimacy crisis” should Ruth Bader Ginsburg, who died on Friday, be quickly replaced by a conservative jurist. It would be Donald Trump’s third appointment following a presidential election in which Senate Republicans declined to vote on Barack Obama’s final nominee. Trump did not win the popular vote in 2016; his Senate coalition doesn’t represent a popular majority. In replacing Ginsburg he would be altering the balance of the court more decisively than with his previous picks, both of whom took seats from Republican appointees.

And he would be doing so in a country that’s already polarized, maddened, suffused with hysteria. The madness around Supreme Court battles has been building steadily since Robert Bork’s defeated nomination in 1987, and at some point it has to be defused. If someone — which means some Republicans, at the moment, because the power is in their hands — doesn’t find a way to de-escalate, to concede some ground, then the court and even the Constitution could be in the gravest sort of peril.

That’s the situation as understood on the left and much of the center. But our senator is a Republican senator, mindful of his own coalition’s views. He knows there is more than one way for an institution to lose legitimacy, and that for many conservatives the high court eviscerated its own authority decades ago, when it set itself up as the arbiter of America’s major moral controversies, removing from the democratic process not just debates about sex and marriage and school prayer but life and death itself.

Those “many conservatives” include this columnist. Since I became opposed to abortion, sometime in my later teens, I have never regarded the Supreme Court with warmth, admiration or patriotic trust. What my liberal friends felt after Bush v. Gore or after Brett Kavanaugh’s confirmation or in imagining some future ruling by Amy Coney Barrett, I have felt for my entire adult life.

And our Republican senator knows that this feeling has sustained itself because the conservative effort to change the courts was balked and limited, over and over again, despite many seemingly no-doubt electoral victories and sweeping presidential mandates. For decades, conservatives elected Republican presidents, Republican presidents appointed Supreme Court justices — and yet about half of those justices turned out to be either outright judicial liberals or “swing” votes who always seemed to swing toward social liberalism.

So if it seems unfair and delegitimizing to liberals today that a president without a popular-vote mandate should be able to appoint the successor to Ruth Bader Ginsburg, conservatives might respond by asking what democratic “fairness” delivered David Souter and John Paul Stevens to a combined 54 years on the court as Republican appointees? Or what “fairness” made Anthony Kennedy rather than Antonin Scalia the dominant judicial figure for the decades that followed Ronald Reagan’s presidential landslides?

And further, what would it say to the millions of voters who have supported the Republican Party almost exclusively because of judicial politics for decades, for a situation to come along where there is no constitutional bar to appointing Ginsburg’s successor, and then Republican senators simply cede the opportunity, extracting at most a vague no-future-court-packing promise in return? At least with Souter, the seat wasn’t ceded to liberals on purpose.

That’s what our senator encounters when he inclines his ear rightward. But if he has wisdom, he can also sense in the clashing arguments a substrate of agreement — a shared recognition that a system in which the great questions of our country are settled by the deaths of octogenarians is too close to late-Soviet Politburo politics for comfort, a shared acknowledgment that too much deliberation that belongs in other branches is being shunted to the Supreme Court.

The question is what, if anything, would need to happen to make that substrate the foundation for a better system, a decisive change in judicial appointments and a step back from juristocracy.

One answer, the “Mr. Smith Goes to Washington” answer, is that a brave stand in favor of bipartisanship by a few Republican senators might set the stage for a return of wise-man politics, in which various reforms proposed for the Supreme Court — shorter terms, rotating appointments, a larger bench appointed by bipartisan committee — could be pushed through by Republicans and Democrats together, in a Joe Biden presidency or thereafter.

The message of the stand would be, let’s not do this, but its goal would be to get both parties to say, let’s never get in this situation again.

But that might be an idealist’s fancy. Suppose that Ginsburg isn’t replaced this fall, Biden is elected, and he fills her seat and then replaces at least one conservative justice as well, flipping the court back to liberal control. The Democratic incentive to reform our juristocracy would diminish or evaporate, and liberalism’s self-understanding as the party of hyper-educated mandarins would come back to the fore, making progressives enthusiastic about judicial power once again.

Meanwhile, conservatives would have all of their suspicions about establishment Republicans confirmed yet one more time, and they could add the Supreme Court to the lengthening list of elite institutions in which cultural liberalism’s power seems more consolidated every day.

The likely result would be a right-wing coalition that’s angrier and Trumpier than the G.O.P. that nominated Trump himself four years ago. So our imagined Republican senator’s reward for his high-minded vote could easily be a longer-term defeat for moderate conservatism: The judiciary would be handed over to ambitious liberals, and his own party would become more populist, paranoid and hostile to any form of compromise.

Whereas if he voted to confirm, then the worst-case scenario, the threat that Democrats are waving, would probably be an attempt at court packing in a Biden presidency, or perhaps in a Kamala Harris presidency down the line.

Such a development would no doubt make Twitter unbearable and inspire Republicans to their own round of angst about legitimacy and norms. But once you recognize the current system’s brokenness, it’s not clear it would be all that terrible a fight to have.

For one thing, to fight a battle over the court on those terms would commit the Democrats decisively to the position that the courts should be under small-d democratic control, rather than allowing them to replace Ginsburg, breathe a sigh of relief and revert to a liberalism of philosopher kings (and queens).

For another, if an era of court packing tit-for-tat weakened the high court, making its members more cautious and its decisions appear more overtly political, then that could have one of two positive consequences: It could push some power back toward the legislative branch, where under our constitutional schema it still formally belongs, and it could eventually push the warring parties toward an exhausted stalemate, from which bipartisan court reform might be more likely to emerge.

A lire aussi
World News – GB – Bonnie Tyler promises ‘The best is yet to come’: Q&A

Of course I am speculating, but my point is to suggest the inherent unknowability of some “what’s best for the republic” outcome as our Republican senator contemplates his vote. It might be that a high-minded renunciation of power saves us from a crisis … but it might just as easily be that the only way out of the crisis is through, meaning for both sides to contest frankly for the power to change a broken system, and to look for new norms on the other side rather than propping up old ones that clearly don’t work anymore.

And the unknowability means that the decision is probably better reduced to its simplest form. All that our senator knows about this vote for certain is that it will give one of the (unfortunately) most powerful offices in America to either the person nominated or some person chosen by the current Democratic nominee.

If the person nominated seems like a better choice to be entrusted with that power, then despite all the atmospherics, there’s a clear case for voting yes.

The Times is committed to publishing a diversity of letters to the editor. We’d like to hear what you think about this or any of our articles. Here are some tips. And here’s our email: [email protected]

News – Opinion | How the G.O.P. Might Get to Yes on Replacing Ruth Bader Ginsburg 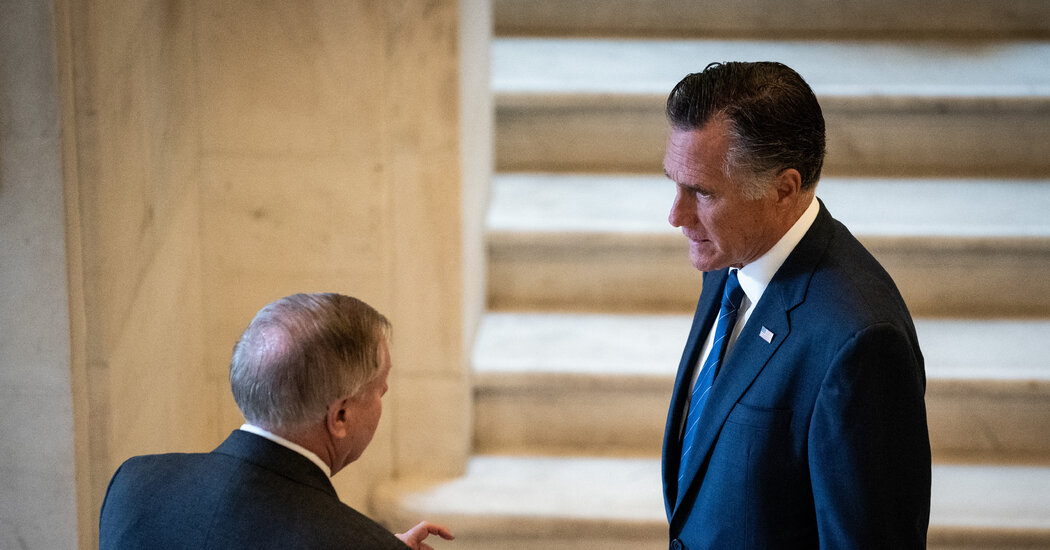