The finger-pointing appears to be a pre-emptive effort to assign blame in the event of election chaos as a record number of Americans are expected to vote by mail because of the pandemic.

WASHINGTON — The Postal Service postcard urging voters to “plan ahead” if they intended to vote by mail seemed innocuous enough.

But not to Colorado’s secretary of state, Jena Griswold, who dispatched her staff to call the Postal Service trying to stop it — a request that was denied — and then sued the agency in an effort to halt its delivery, arguing that the mailer was filled with misinformation that would disenfranchise voters in her state.

Such is the toxic state of the relationship between some state and local election administrators in both parties and the Postal Service six weeks before Election Day, as officials throughout the country scramble to prepare for what is expected to be an unprecedented flood of mail-in ballots in an extraordinary pandemic-era election.

The feuding suggests a pre-emptive blame game between the nation’s mail-delivery agency and those charged with administering and counting the vote, as the prospect of an operational and political crackup looms in November.

Ms. Griswold, a Democrat, said that the postal official who told her staff that the mailer could not be stopped had offered to clear up any confusion it might cause via a news conference or op-ed, but she rejected the idea.

“We don’t provide cover for bad actors, especially when we’re giving them the ability to course-correct,” she said in an interview with The New York Times.

Over the Postal Service’s objections, a judge has issued a temporary restraining order blocking the Postal Service from continuing to deliver the postcards in Colorado, and other states are considering similar legal action to stop the mailers, which are being delivered nationwide.

The struggle is unfolding as voting by mail has become a campaign issue, cited in fund-raising appeals and political attacks by both parties. It has been fueled by Mr. Trump’s unsubstantiated claims that mail-in voting is fraudulent and is being used to rig the election, and Democrats’ countercharges that Mr. Trump’s allies at the Postal Service are working with him to sabotage the election by hobbling the mail vote.

The acrimony has already hampered the effort to develop coherent messaging and processes for handling mail ballots, according to people inside the Postal Service and election administration agencies. They warn that if the working relationship doesn’t improve quickly, it could increase the likelihood of election-time chaos, including the potential disqualification of as many as 1 million ballots for missed deadlines.

The friction is expected to feature prominently in a private telephone conference scheduled for Thursday between dozens of secretaries of state from around the country and Louis DeJoy, the postmaster general. Several secretaries of state said in interviews that they intended to use the session to voice concerns about the postcard and operational and policy changes that had slowed mail delivery.

Democrats, including some election administrators, have cast those changes as part of an effort by Mr. DeJoy, a major donor to the president, and the Republican majority installed by Mr. Trump on the postal board of governors to help the president win re-election.

The Postal Service has mounted an elaborate effort to push back on those claims. It expanded its crisis communications consulting team and hired a new lobbyist to work with Congress and state officials, and started a public education campaign — including the postcard and a television advertisement — intended to reassure voters that it is equipped to handle any increase in mail volume associated with the election.

Privately, postal officials have seethed at state election administrators and lawmakers. They contend that states have failed to heed recommendations to move up deadlines for requesting and returning ballots to ensure that they will be received in time to be counted.

The issue transcends partisan politics. Some Republican secretaries of state have expressed concern about the Postal Service’s changes and opaque operations, while some Postal Service officials and nonpartisan experts have pointed a finger back at the states for failing to shift their deadlines to accommodate the expected surge in voting by mail.

The blame game has the potential to become a self-fulfilling prophecy, fomenting further distrust in the election process and results, warned Frank LaRose, the secretary of state of Ohio.

“If we tell Americans that elections are a big mess, then they’re going to start to believe that and not want to participate,” Mr. LaRose said in an interview this week. “If I had one call to my fellow elected officials, it’s: Let’s be more responsible with the way that we talk about elections.”

Mr. LaRose, a Republican, has expressed concerns about the potential effect of mail-delivery changes on the election, but also described himself as “cautiously optimistic” about the Postal Service’s ability to handle a higher-than-usual volume of mail ballots. Tensions between the states and the Postal Service began to escalate in July, when the Postal Service sent a letter that urged 46 states, including Ohio, to move their deadline for mail-in ballot requests earlier to accommodate the expected flood in mail-in ballots. Some Democrats ascribed political motivations to the request. And while Mr. LaRose said he thought it was sound advice, Ohio did not comply, a decision he blamed on the state’s legislature.

Even weeks after the agency’s warnings, only a handful of states satisfy the Postal Service’s recommendations for deadlines to request a mail-in ballot. Twenty-two states still allow voters to request absentee ballots within the final week of the election, too close to Election Day to ensure they make it from the election board, to the voter and back in time to be counted.

Some election officials, rather than change upfront deadlines, sought permission to extend the length of time during which ballots that arrived after the election could be counted. Those deadlines vary by state, but all require ballots be postmarked on or before Election Day.

An internal Postal Service document stressed the “importance of coordination between state election officials and U.S.P.S.” to prevent “significant issues” the agency identified with mail voting efforts during the 2016 and 2018 elections, including “unrealistic state statutory time frames for requesting a ballot, inconsistent approaches to election mail by local boards of election within states” and other issues. The document, which was obtained through a Freedom of Information Act lawsuit by the watchdog group Protect Democracy, detailed an outreach plan to state officials to remedy the situation. It predicted that “these issues will be magnified by the increased volume of election mail ballots expected for the general election as a result of concerns about Covid-19.”

Missed deadlines are a key culprit in the rejection of ballots, the number of which surged as record shares of voters cast ballots by mail during primary elections this year, according to an analysis by Michael McDonald, a voter turnout expert at the University of Florida. It found that, in 24 primary elections this year, more than 500,000 mail-in ballots were rejected, or 2 percent of those returned by voters.

With the demand for voting by mail rising briskly, there is a growing concern that the number of ballots rejected could surpass 1 million in November if rejection rates remain the same or increase further.

That was the argument behind lawsuits filed in August by several states and the District of Columbia against the Postal Service and the postmaster general. One of the lawsuits claimed that the changes implemented by Mr. DeJoy were illegal and would impede state efforts “to conduct free and fair elections in the manner plaintiff states have chosen.”

Days after the lawsuits were filed, Mr. DeJoy held a phone call to discuss vote-by-mail preparations with four secretaries of states, including Mr. LaRose of Ohio.

During the discussion, Jay Ashcroft, the secretary of state of Missouri and a Republican, asked Mr. DeJoy to ensure that secretaries of state would have a chance to review any national mailings containing voting information before the Postal Service sent them, according to people familiar with the call. They said that Mr. DeJoy responded that it would be helpful for states to be part of the review process.

Yet multiple secretaries of state told The Times in interviews that they saw the postcard language only after it had been printed and entered the mailstream.

That irked top election officials in several jurisdictions that automatically send all voters mail-in ballots, such as Colorado, which recommends that voters return their ballots eight days before the election.

Ms. Griswold, the Colorado secretary of state, has called on the Postal Service to fund a “corrective” mailing to residents of her state, and she criticized it for fighting the restraining order in court. “You know, everybody makes mistakes. Just take responsibility and act like a good partner,” she said.

David Partenheimer, a Postal Service spokesman, did not respond to a question about funding another mailer. But he said agency representatives have “had conversations with state election officials offering to work with them on joint messaging to help clear up any confusion for Colorado voters.”

Lee Moak, a Democratic appointee to the Postal Service’s board of governors who leads the board’s election mail committee, defended the postcard, saying it has had a positive effect. In a statement issued on Tuesday, he noted that, since the mailing, nearly 650,000 people had visited a Postal Service website listed on the postcard that provides information on voting by mail, including links to individual states’ election boards.

“Our guidance has been and continues to be that individuals who plan to vote by mail need to understand their state’s rules and deadlines, and plan ahead,” Mr. Moak said in the statement.

But Kim Wyman, the secretary of state of Washington and a Republican, called the postcard “inaccurate,” and said her office planned to correct the misleading information through social media and messaging.

“It would just have been nice to have the information go out correctly on the first try rather than to try to have to explain to people why it was wrong,” Ms. Wyman said.

She said that during Thursday’s call, she intended to ask Mr. DeJoy about the postcard and request that, “if they’re going to do any similar future mailings, please work with us on the copy and work with us on the messaging, so we don’t have to waste any time.”

At a town hall event, President Trump faced tough questions from undecided voters. The primary season has ended, with victories in Delaware for Senator Chris Coons and Sarah McBride, a transgender candidate for state legislature.

Early voting for the presidential election starts in September in some states. Take a look at key dates where you live. If you’re voting by mail, it’s risky to procrastinate. 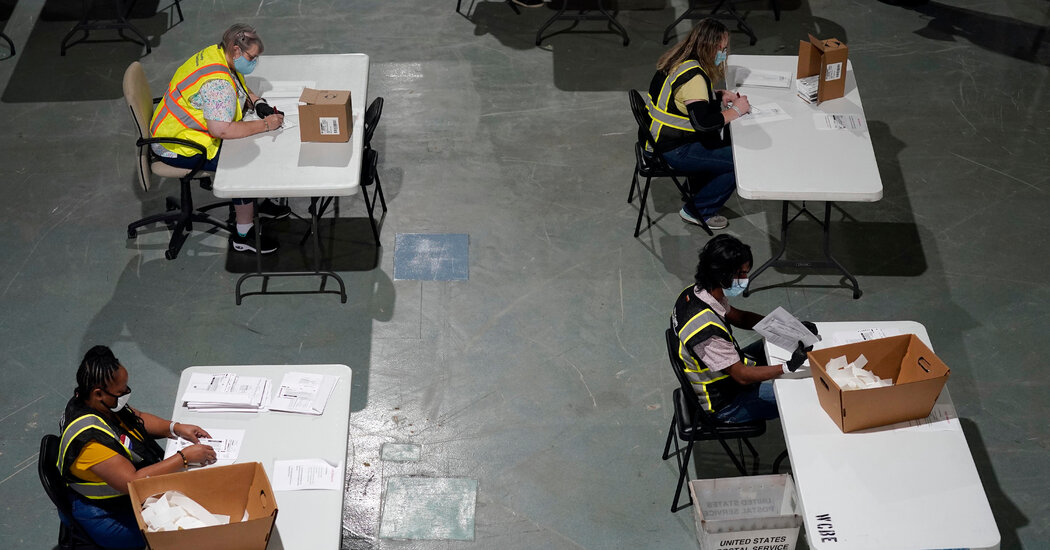 Supreme Court nominations are taking longer. Time is not on Trump’s side.

Liverpool’s ‘perplexing footballer’ who could be next Ings or Joelinton

Supreme Court nominations are taking longer. Time is not on Trump’s side.