Prince Harry, 36, and Meghan Markle, 39, tied the knot on May 19, 2018 at St George’s Chapel in Windsor. The lavish event required meticulous planning and was watched by royal fans everywhere. Now new book Finding Freedom by Omid Scobie and Carolyn Durand has shed  light on the days and weeks leading up to the wedding and contains sensational claims about a reported falling out between Prince Harry and Queen Elizabeth II’s Head Dresser Angela Kelly.

Angela is known to be the Queen’s closest confidant and has been employed by the royal household since 2002.

Angela is one of the few people who can handle the Queen’s tiaras and after it had been decided which tiara Meghan should wear, an appointment needed to be arranged with Angela so she could try the precious piece on with styled hair.

According to Mr Scobie and Ms Durand tension between Prince Harry and Mrs Kelly arose when it came to organising a hair appointment for Meghan to try on her tiara.

The book claims Harry felt Angela was ignoring his requests to book in a hair appointment for Meghan.

A lire aussi
Ghislaine Maxwell said under oath that she ‘never’ saw Jeffrey Epstein have sex ‘with a minor,’ unsealed deposition reveals

Mr Scobie and Ms Durand write: “Like most senior staff at Buckingham Palace, Angela is on call should Her Majesty require her service – and at the time of the first hair trial requests, she had apparently been busy at Windsor Castle, where the Queen was based for Easter Court.

“But as the weeks went by, and the requests from aides working for Harry continued, a time for Meghan to try the tiara had yet to be scheduled.

Mr Scobie and Ms Durand claim Harry’s frustration culminated in a ‘heated exchange’ between him and the Queen’s head dresser.

They write: “What followed between the prince and Angela was a heated exchange that was far from the typical restraint expected.

“According to a source Harry had no problem confronting the issue head-on. ‘He was fed up’, said the aid.”

The authors claim the tiara trial issue continued to be a source of tension with the wedding just a few weeks away.

They write: “With the wedding just a few weeks away, the lack of tiara hair trial continued to be an issue of contention.

“Members of staff at Kensington Palace just weren’t able to get in touch with Angela to make it happen.

“People were frustrated – and confused. Why was it so hard to set up a time for Meghan to try the tiara with her hairdresser?”

According to Mr Scobie and Ms Durand, Prince Harry ultimately went to the Queen to seek help with the issue.

They write: “In the end, Harry had to speak to his grandmother about the situation. And she got her trial.”

While Harry was allegedly convinced Angela was purposefully snubbing Meghan, a senior aide claimed her was being “oversensitive.”

The authors write: “A senior Buckingham Palace aide insisted that Harry was simply being ‘oversensitive’ when he accused Angela of trying to make things difficult for his fiancee.

“But a source close to the prince said nothing could convince Harry that some of the old guard at the Palace simply didn’t like Meghan and would stop at nothing to make her life difficult.” 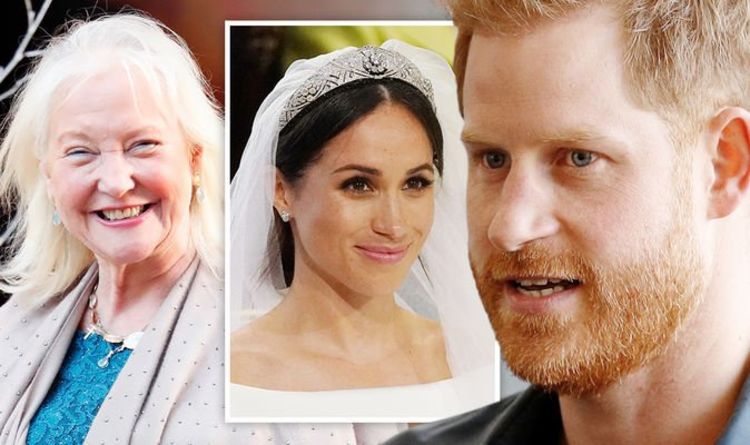