SNL joked that the two town halls were like watching “a Hallmark movie and an alien autopsy.”

If the two town halls — one with President Donald Trump and one with Democratic nominee Joe Biden — on Thursday weren’t enough for you, October 17’s Saturday Night Live cold open reprised the action. And it threw in a Wrestlemania-style folding chair, as well as a bit of Bob Ross, for good measure.

“We now present a rebroadcast of those town halls the way most Americans watched them,” a narrator intoned before opening on Day as Stephanopoulous. “Flipping back and forth, trying to decide between a Hallmark movie and an alien autopsy.”

Day opened the skit by warning, “The vibe we’re going for tonight is ‘poorly attended college lecture,’” before an aviator-wearing Carrey appeared to make finger guns at the crowd.

After a rambling Carrey answer ended with a vaccine-related math problem and an entreaty to “please, show your work,” the skit flipped over to McKinnon, as she introduced herself as “surprise bad-ass Savannah Guthrie.”

“If you were angry at NBC for doing this town hall,” McKinnon says before teeing up questions about white supremacy and QAnon, “Just let me get a few questions in and I think you’ll thank me.”

“You mean the group that thinks Democrats are a cabal of Satan-worshipping pedophiles, and that I’m their messiah?” Baldwin tells McKinnon. “I don’t know anything about them at all, no.”

McKinnon responded by taking a line almost verbatim from the real-life Guthrie, telling Baldwin, “You can’t just do things like that, you’re not just someone’s crazy uncle.”

From there, the skit cut back and forth between the town halls, featuring Carrey talking to God and Baldwin holds forth on Judge “Amy Conan O’Brien.”

Maya Rudolph’s Kamala Harris also made a brief appearance to tell an enthusiastically nodding Black woman in the background of Baldwin’s answer on Roe v. Wade — in reality, a onetime pro-Trump congressional candidate named Mayra Joli — that “I only nod that much when a waiter asks if I’ll be having mimosas at brunch.”

Poking fun at senior Trump adviser Mercedes Schlapp’s characterization of Biden’s town hall — which in reality was a staid, wonky affair — as “an episode of Mister Rodgers Neighborhood [sic],” when the skit turns back to Carrey, he begins singing “Won’t you be my neighbor?” while donning a cardigan. His next appearance is as painter Bob Ross in front of an easel with a nature scene.

McKinnon’s next appearance in the skit, on the other hand, featured her distracting Baldwin before leveling him with a folding chair to the face.

As the town halls wrap up, soaring music swells: “We have to restore sanity to the nation,” Carrey said. “If elected, I promise I won’t tweet once — because I don’t know how.”

“All right then, just try and take me alive!” he yells as the rest of the cast rushes in to start the show.

Millions turn to Vox each month to understand what’s happening in the news, from the coronavirus crisis to a racial reckoning to what is, quite possibly, the most consequential presidential election of our lifetimes. Our mission has never been more vital than it is in this moment: to empower you through understanding. But our distinctive brand of explanatory journalism takes resources. Even when the economy and the news advertising market recovers, your support will be a critical part of sustaining our resource-intensive work. If you have already contributed, thank you. If you haven’t, please consider helping everyone make sense of an increasingly chaotic world: Contribute today from as little as $3. 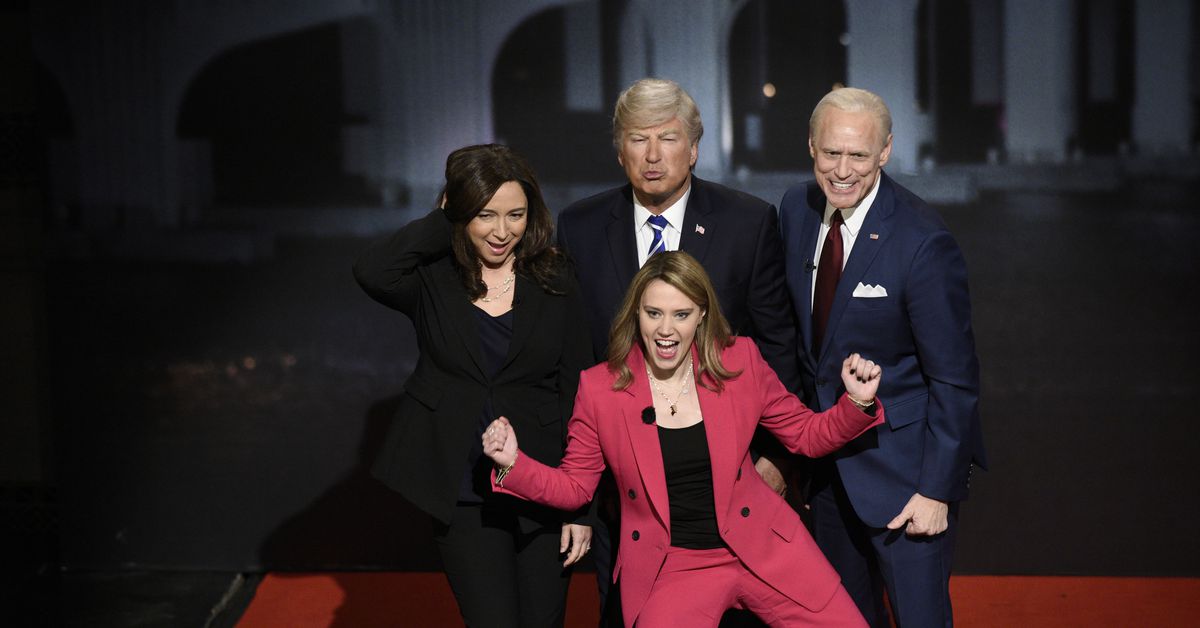 Unrest erupts over police killing of Black man near Portland

Unrest erupts over police killing of Black man near Portland

Dyche ‘not panicking’ as winless run continues for Burnley