The two victims were a man and a woman between the ages of 18 and 22, according to officials in Rochester, New York.

A backyard party in Rochester, New York, on Friday night ended in tragedy when a shooting broke out, killing two people and injuring an additional 14 attendees.

The two victims were identified as Jarvis Alexander and Jaquayla Young, both of whom were 19 years old, police said in a press conference Saturday evening.

Another 14 people, all between the ages of 17 and 23, suffered non-life-threatening injuries and are expected to survive.

The shooting was a “tragedy of epic proportions,” interim police chief Mark Simmons said in his address to the press early Saturday morning. “Sixteen victims is unheard of.”

Police said later that day that they do not believe the victims were intended targets of the shooting.

Police were called to Pennsylvania Avenue just before 12:30 a.m. on Saturday. Simmons said officers arrived at the scene to find about 100 attendees running from the location.

“This is yet another tragedy where individuals are having these illegal, unsanctioned house parties taking place in these properties, which, number one, is not safe because of COVID, because of the conditions. And then you add in alcohol and violence and it just becomes a recipe for disaster,” said Simmons.

There are presently no suspects in custody, and Simmons was unable to confirm if the attack was the act of a single shooter.

A police statement to BuzzFeed News declined to comment on the details of what weapons were used but made clear that “several dozen rounds were fired.”

Rochester Mayor Lovely Warren was at the crime scene Saturday, where she spoke with residents and police officers.

She also addressed the press and asked the public to “pray” for the city and its residents in the wake of this latest tragedy.

A lire aussi
Is This Line From A Shakespeare Sonnet Or A Harry Styles Song?

The city of Rochester has been under intense scrutiny after video footage capturing the violent arrest of a Black man was released by his family earlier this month.

Officers had detained Daniel Prude naked on the street in March, put a spit hood over his head, and held him down with his face pressed to the ground for two minutes. The 41-year-old died in hospital seven days later when he was taken off life support.

His death ignited further protests in Rochester and led to the police chief and the entire command staff of the department stepping down. 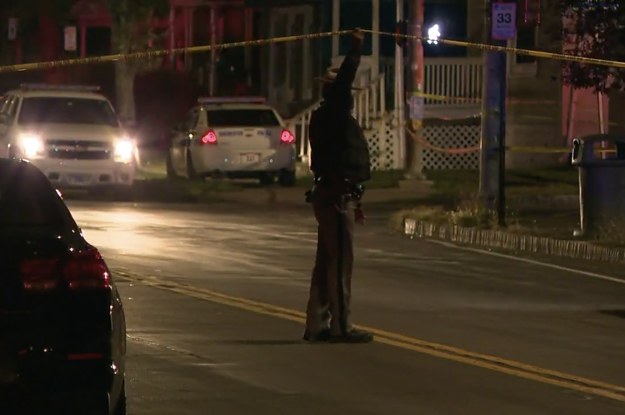