9 Women’s World Cup Players Who Are A Dang Inspiration

These nine women are among the many Women’s World Cup players giving a new meaning to the word “goals.”

Inspirational stat: This California native gained international acclaim when she snagged the winning goal in the FIFA U-20 Women’s World Cup, securing the United States’ victory over North Korea. This moment was later sanctified by FIFA when it was named Goal of the Tournament.

Inspirational stat: The Brazilian superstar has snagged FIFA’s Player of the Year award five years in a row — beginning in 2006, when she was just 20 years old. She’s widely considered one of the best players of her generation.

Inspiring stat: Bouhaddi has claimed three consecutive Goalkeeper of the Year awards from the International Federation of Football. In addition, she’s got 137 caps for France to her name — all beginning when she started at 17 on France’s national team.

Inspirational stat: With childhood boxing under her belt and, of course, years of football experience to boot, Sole Jaimes is a formidable force to be reckoned with. Jaimes has six international goals to her name, as well as two starring roles in FIFA U-20 Women’s World Cups.

Inspiring stat: Marozsán was the youngest person to ever play in the Bundesliga, a professional football league in Germany — when she was just 14 years old.

Inspirational stat: Sam Kerr made her international debut at just 15 years old, and in 2018 was awarded Young Australian of the Year.

Inspirational stat: By technical standards, Christine Sinclair is Canada’s most successful soccer player to date, with 180 career international goals as of 2019. Oh, and she’s got great taste: Her favorite TV show is Grey’s Anatomy.

Inspirational stat: The 30-year-old scored the first goal of the 2019 Women’s World Cup in France’s match with South Korea, kicking things off in the most impressive manner possible.

Inspirational stat: This American forward, who has both an Olympic gold medal and an appearance on a Japanese game show on her résumé, has snagged 44 goals and 57 assists, which is the fifth highest in the history of the US team. 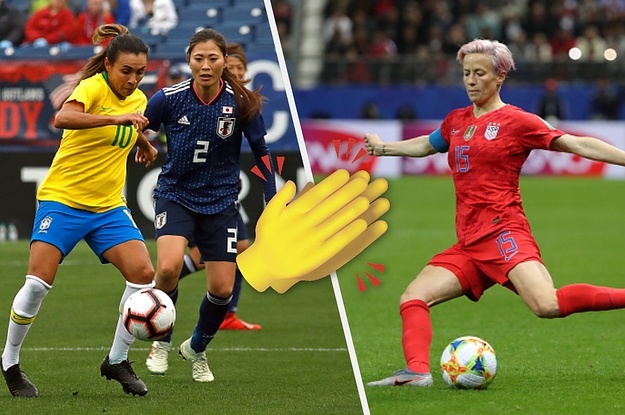