About: You might have heard of Morgan for scoring 5 of the 13 goals in the USA’s historic win against Thailand, making her tied with Michelle Akers for most World Cup goals in a match. As a young player, she earned the nickname “Baby Horse” because of her stallion-esque speed. She’s married to Servando Carrasco, midfielder for LA Galaxy.

About: Along with fellow Californian Alex Morgan, and Carli Lloyd, Rapinoe is one of the three captains of the US national team, and for good reason. During the 2011 World Cup, she delivered a legendary cross to Abby Wambach in the 122nd minute of the game — still the latest goal ever scored in a World Cup match. She’s a vocal advocate for LGBT organizations and has partnered with the Gay, Lesbian & Straight Education Network to develop a safe climate for young athletes in schools.

About: At 36, Lloyd is the oldest member of the team, and also one of the most accomplished. In 2015 she became the first woman to score three goals in a World Cup final, all of which were in the first 16 minutes during the match against Japan. After traveling the world with her storied soccer career, she returned to her native Jersey in 2018 to live with her husband and play for Sky Blue.

About: This is Lavelle’s first World Cup, but you wouldn’t know it by how she’s playing; she’s already scored two goals against Thailand in her debut game. Rooting for her back home in the States is her adorable English bulldog, Wilma.

About: Another USA newcomer who broke out during the match against Thailand was Mewis, who also scored two goals. Mewis’s older sister, Kristie, was also a member of the the national team and plays for the Houston Dash.

About: Horan was the first US woman soccer player to skip college and play professionally overseas. After playing in Paris for four years she has returned to the US to play for Portland, and is already making a splash in the World Cup, scoring one goal in the 13–0 match against Thailand.

About: When Pugh played in the 2014 World Cup at age 17, she was the youngest player to do so in the past 11 years. Following the lead of teammate Horan, she skipped college to play professionally and began playing for the Spirit in 2017, despite the move being the first time she had ever lived alone.

About: With two gold medals and a World Cup win for the national team, Heath brings an impressive amount of experience to the team. When’s she’s not on the field, she’s a free spirit who loves to surf and skate.

About: Some have said defense might be the USA’s one weakness this tournament, but Dahlkemper is here to disprove that theory. Voted NWSL’s defender of the year for 2017, Dahlkemper also recently posed for the 2019 Sports Illustrated swimsuit issue!

About: Naeher is no stranger to the World Cup, having been on the team for the 2015 tournament, but this is the first time she’s starting. Although she has a lot to prove with the departure of longtime team goalie Hope Solo, her teammates are confident she will prove herself in the games to come. 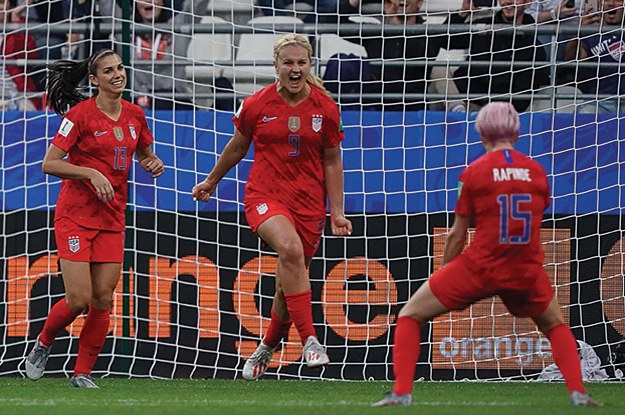